With Perth missing out on a round of the V8 Supercar Championship Series in 2010, TeamVodafone celebrated its return in the best possible way, with both drivers finishing practice with the first and third fastest times. 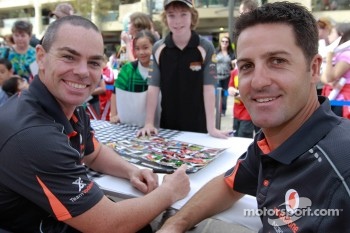 Jamie Whincup regrouped and returned to the top of the timesheets after a horror run on the street of Hamilton. The TeamVodafone driver posted the fastest lap of practice with a time of 0:56:6758.

Teammate Craig Lowndes was only two-tenths of a second behind in third, with a time of 0:56:8772.

The TeamVodafone duo have hit the Wanneroo track determined to defend their 2009 results, having both started off pole position and celebrated a race victory in the V8 Supercars last West Australian outing.

TeamVodafone’s live raceday blog from the pit garage will commence on www.teamvodafone.com at 2:05pm (local time).