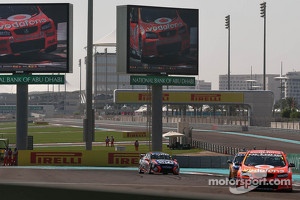 TeamVodafone currently commands a 513 point lead over Ford Performance Racing and they will clinch the Team's Championship if they leave Winton Motor Raceway 576 points or more in front of FPR.

Jamie Whincup can also potentially seal his fourth V8 Supercar Driver's title this weekend, the #1 Holden pilot only needs to score four points more than Ford driver Mark Winterbottom over the two races to come out of the event 300 points clear of Winterbottom.

The defending champion is not getting ahead of himself, acknowledging there is still the Sydney 500 to go and also the potential for a points penalty.

"Although the probability of coming out of the weekend with more than a 300 point lead is low, if it does happen, we won't be celebrating early as there is still the possibility to lose points at Homebush," Whincup said.

Whincup has taken three podium finishes in his last four starts at Winton Motor Raceway and has won three races over his V8 Supercar career at the rural Victorian circuit.

"It’s a dangerous weekend being FPR and HRT's test track," Whincup continued. "However we have had some great results there in the past.

"Weather is always a factor when racing down south, hopefully the sun shines on us all weekend and leads to good results which could make life easier heading into Homebush."

TeamVodafone teammate Craig Lowndes has claimed three race wins and five podium results at the Winton track, however he is yet to win a race there in a Holden.

Lowndes’ pole position for last year’s Saturday race was his first at Winton and the #888 driver is hoping to add to that this weekend.

"I really enjoy Winton as a circuit, I've done many miles in a range of categories and enjoyed great success at the circuit in the past. This weekend I need to bounce back from Abu Dhabi and reclaim some Championship points to catch Frosty," Lowndes said.

"With the event being held later in the year it will be lot hotter than what we are used to. It is going to change our setup and how we race," Lowndes concluded.