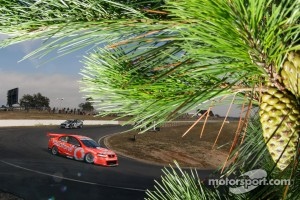 Whincup endured a nervous moment in the morning's practice session, running off the track at Turn 6, the #1 Commodore driver returned to the track without any damage. After some minor changes between sessions, Whincup recorded the fourth fastest time in Qualifying, setting his best time on his last attempt, and just over one-tenth of a second shy of pole.

The defending champion got the run on Mark Winterbottom off the line in Race 3 of the V8 Supercar Championship Series, the FPR pilot then ran wide coming into the notorious Symmons Plains hairpin and almost forced Whincup off the track, the TeamVodafone driver just managing to keep control of his Commodore to hold second position.

Whincup lost a spot during the pitstops and maintained third until the race end.

Across the other side of the garage, Craig Lowndes finished sixth in practice and struggled to find the right amount of pace in Qualifying, ending the session behind his teammate in fifth.

Starting the 59 lap race on hard compound tyres, Lowndes' Holden lost a few positions off the line but quickly gained momentum and battled Reynolds for sixth position before the pitstops.

Lowndes held off a charge from Reynolds as he battled Shane Van Gisbergen for fourth. Unable to find a way past the Ford driver, Lowndes settled for fifth position.

After a solid performance from the TeamVodafone duo, Whincup remains second in the championship on 399 points while Lowndes sits in fifth on 317 points.

The Tasmania Challenge will conclude tomorrow with a final 30 minute practice session at 10.05am (AEDST), Qualifying at 1.00pm (AEDST) ahead of Race 4 of the V8 Supercar Championship Series at 3.35pm.