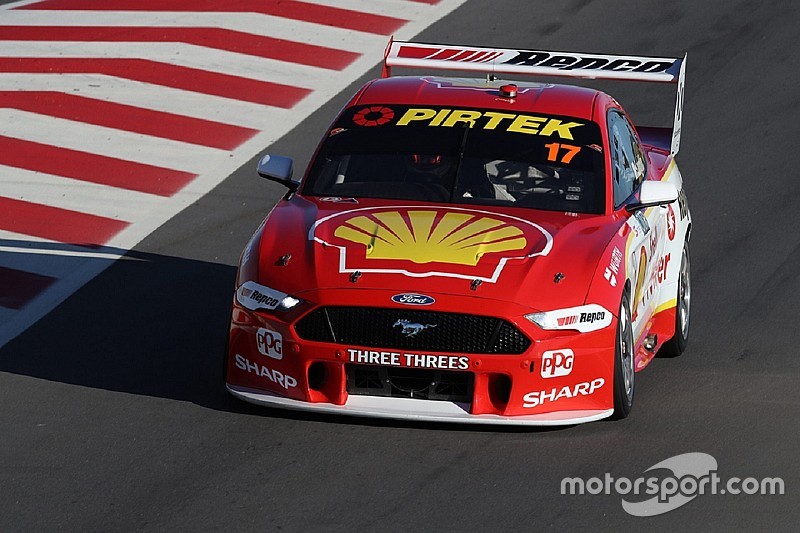 Scott McLaughlin broke the unofficial Tailem Bend lap record by half a second as he dominated the second Supercars practice session.

The DJR Team Penske driver wasted little time once the 30-minute session was underway, dipping straight into the 49s with a 1m49.884s on his first lap.

He was briefly displaced by Anton De Pasquale's 1m49.855s at the five-minute mark, before hitting back with a 1m48.804s that left him a second clear of the field.

With a little over 10 minutes to go McLaughlin's teammate Fabian Coulthard closed the gap down to just under a tenth, as De Pasquale and Will Davison also moved into the low 49s.

But, with a minute to go, McLaughlin lowered the benchmark to a remarkable 1m48.104s, seven-tenths clear of the field and a half a second under the existing unofficial lap record.

Chaz Mostert did soften the blow slightly by improving on his final run, however he still fell 0.5s short of McLaughlin.

"We rolled out with a really good car," said McLaughlin.

"Obviously it was a bogey round for us last year so it was about getting out there and getting a balance straightaway. We tried a couple of things in Practice 1, got to a nice balance, and just then it felt awesome.

"There’s not much I can fault from it."

David Reynolds was the best of the Holdens in sixth, followed by Rick Kelly, De Pasquale and Davison.

Main game debutant Thomas Randle ended an impressive Friday in 10th, which means he'll get to sit out Q1 tomorrow.

Both Triple Eight drivers will have to go through all three segments of qualifying, Shane van Gisbergen a lowly 16th fastest, while Jamie Whincup was left stranded in 25th after running wide on his final run.