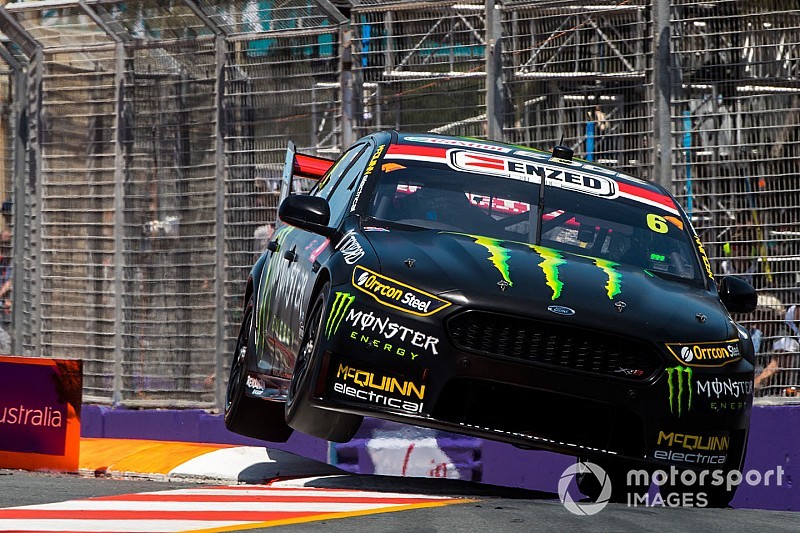 Tickford Racing boss Tim Edwards says the ongoing development of its Falcon package is crucial ahead of the debut of the all-new Supercars Mustang in 2019.

After a difficult 2018 season so far, the four-car Ford outfit made a breakthrough on the Gold Coast that saw Chaz Mostert and James Moffat claim a well-deserved race win.

The pair were right back in the hunt on the Sunday too, only for thunderstorms to result in the second race being abandoned.

According to Edwards, the upswing in form is a sign that the team hasn't given up on the outgoing Falcon package.

While the Mustang will supersede the FG-X next year, Edwards reckons it's crucial to keep pushing with suspension and engine development this year, with those components set to carry over to the two-door body.

“We just kept chipping away. We didn’t give up, put our heads down and just think ‘we’ll wait for the Mustang’,” said Edwards.

“The reality is whatever underpins these [Falcons], the suspension, the engine, all those things underpin the Mustang next year.

“Unlike other categories, you hear in Formula 1 all the time they say they’ve stopped development on the car, waiting for the new one. That’s not the case for us.

"The one thing we’ve got no control over during the course of the championship is the external surface, because that’s locked.

“It’s everything that underpins it that we’ve carried on working hard on, so when we do change the external surface, it should be in a better place again.”

Mostert and Moffat's win was Tickford's first for the season, breaking a 12-month drought as the team has lagged behind the likes of Triple Eight, DJR Team Penske, and Erebus Motorsport.

Having maintained mid-season that keeping the drivers' motivation up hadn't been an issue, Edwards conceded that the Gold Coast win was timely in terms of a moral boost – for both drivers and crew.

“You’re expecting the engineers to be there designing late into the evening and the mechanics building the cars, the machinists… Everyone has to put in above and beyond, it’s the only way to really push forward in this category, the way it’s structured at the moment.

“When you’re expecting them to all do that but you’re not getting the results, it makes it much harder to say you’re not going to be with your wife and kids tonight, you’re going to be at work until 10 or 11pm.

“It’s hard to ask that of people when the team isn’t performing, but to be fair to all of them they just kept at it, kept chipping away.

“Yes they’ve been frustrated, very frustrated that they haven’t been getting the results, but we finally got there.”