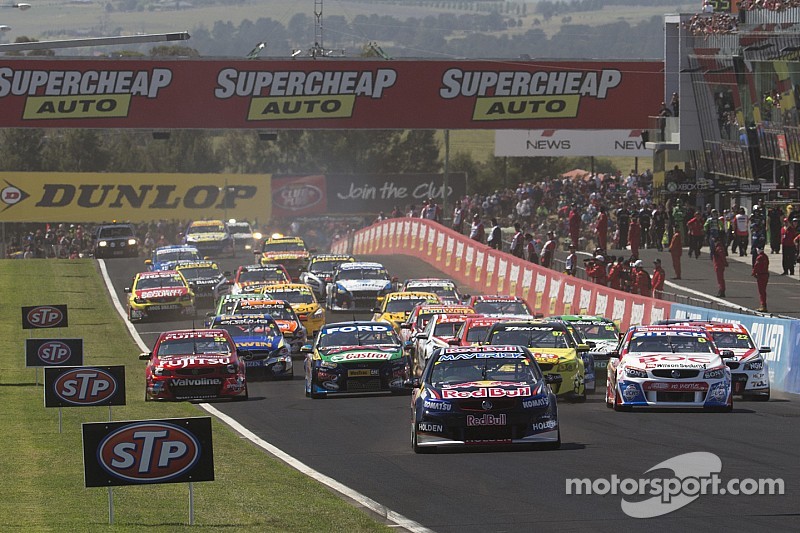 Enjoy this list of top ten Bathurst 1000 moments as we prepare for 58th running of the race.

The Bathurst 1000 is the greatest race in all of Australia and has been around for over half a century. Throughout the years, we've seen plenty of trials, triumphs, and tragedies. Shane Van Gisbergen has earned pole position for this year's event.

With the 2014 edition of the race just hours away, let's run you through some of Bathurst's most memorable moments.

The tenth spot on our list goes to two separate races. Both the 2011 and 2012 editions of this great race ended in spectacular last-lap scraps for the victory. In 2011, Craig Lowndes tried everything to muscle his way past a slowing Garth Tander, but to no avail. 2012 was a classic Holden vs. Ford battle that saw David Reynolds take on one of the titans of the sport, Jamie Whincup.

On the opening lap of the 2010 Bathurst 1000, Fabian Coulthard took an unconventional route down into The Chase, spinning into the gravel trap. The car dug in and he started to roll end over end. He walked away unscathed.

8. Playing in the sand

BMW was dominating the 1985 Bathurst 1000 with Jim Richards on point, but his day quickly went down hill. He spun and found himself stuck in the gravel, quickly followed by his teammate George Fury. The duo worked together, trying to dig Richards' car out with their bare hands. However, their efforts were to no avail.

John Fitzpatrick and Bob Morris were leading the 1976 Bathurst 1000, holding a 136 second advantage over their closest pursuer. Suddenly, the engine started to fail with a couple laps remaining. As Morris looked on from the pits, Firzpatrick desperately tried to limp the ailing car home. Morris and the team began tearing up with emotion as their lead started getting slashed to pieces, but they were able to beat the odds and hold on.

2013 came down to an epic showdown between two of the sport's greats. Holden's flagship driver Jamie Whincup took on Ford's flagship driver Mark Winterbottom. Whincup made a daring move on the outside of Frosty that would cost him the win, but would also secure him a  permanent spot in Bathurst's greatest moments. And finally, Frosty got the win that had escaped him for so long.

5. Bill Brown escapes with his life

One of the scariest moments in Bathurst history came in 1969 when Bill Brown flipped and rolled along the guardrail, which cut into the cockpit of his car. Fans narrowly escaped the airborne machine and Brown somehow escaped with his life and limbs intact.

Mark Winterbottom was 13 laps away from Bathurst glory in 2007, but it all went away in The Chase. On a slick track, he went tearing through the gravel and was launched up into the air. He amazingly kept the car pointed straight and rejoined the circuit in the lead. Lowndes blew by him within seconds though, nearly colliding with the out of control driver. Behind Lowndes, more chaos ensued.

3. When Dick hit the rock

One of the more bizarre moments in Bathurst history took place in 1980. The legendary Dick Johnson was leading when a crazed fan through a massive rock onto the track, which he was unable to avoid. He struck it and violently crashed. The video includes his gutted interview, and also a surprise twist as he tells reporters that he may not be able to race again...

In 1992, the Bathurst 1000 ended under a cloud of controversy. Jim Richards crashed just before a red flag that ended the race. Dick Johnson thought he was the victor, but race control reverted back to the previous lap, allowing the Richards/Skaife duo, who had just wrecked, to take the win. Afterwards, fans booed as the winners stood on the podium and Richards decided to tell them all off in a legendary rant.

It's no secret that Greg Murphy and Marcos Ambrose aren't the best of friends. In 2005, their rivalry came to a head at the crown jewel event for the sport. It may not be the most spectacular (certainly not glorious) moment in the history of Bathurst, but it does epitomize the emotion these drivers experience in every defeat and shows just how much winning means to them all. Ambrose will return to The Mountain next year, so maybe we'll get t see round two?