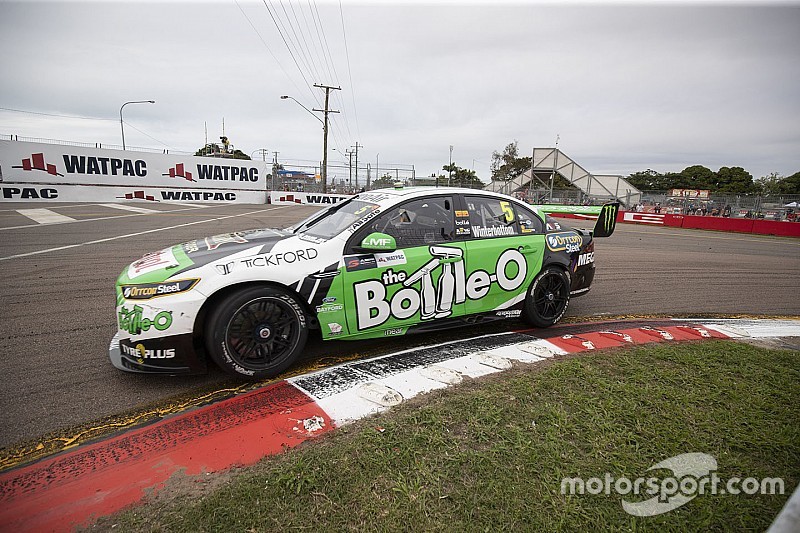 Tickford Racing's improved form in Townsville is all part of a phase of intense development, says team boss Tim Edwards.

The four-car Ford team has endured a turbulent season so far, Mark Winterbottom's second place from the first race in Perth still the team's sole podium from the 18 races so far.

The issue has been centred on an inability to get the Falcons into the set-up window on the 2o18-spec Dunlop control tyre.

There were, however, glimmers of hope from the Tickford Fords in Townsville last weekend. Saturday's race saw Winterbottom start and finish sixth, while Chaz Mostert went from 12th on the grid to fifth on Sunday. Cam Waters was consistently quick as well, with an eighth and a ninth from the two races.

According to Edwards, it was a sign of an ongoing phase of development bearing fruit.

"We’re still in the development phase," he said.

"I’m sure if you went and asked [Penske engineer] Ludo [Lacroix] about what he does on Scotty [McLaughlin's] car, they rattle the spanners around under the wheel arch and go to the next race because they’ve got it into the window and they’re not having to throw the kitchen sink at it.

"He’s probably made more changes this weekend because he hasn’t been as competitive [compared to Triple Eight], but my point is when you find yourself close to the window, you don’t need to be throwing everything at giving him a car he’s got to learn to drive every single time you go out.

"In terms of race pace and tyre degradation, the things that we have been suffering with, we made good steps forward. Obviously qualifying was far from ideal [on Sunday], so we’ve got to do more work and by no means are we going to be backing off. We’ve worked hard to this point and we’ll keep doing the same."

Edwards added that increasing consistency in terms of the car's behaviour is a positive step.

"We’ve definitely made some improvements. Certainly for a couple of the cars [in Townsville] it was more about consolidating all of the stuff they’ve learnt over the last few rounds and just trying to get the drivers’ head around it and turn it into a better package.

"There’s a certain amount to be said for a bit of stability as well. Once you kind of find yourself closer to the window, then you allow the driver to learn to drive the car for a prolonged period. The last thing you want to do is constantly be throwing the kitchen sink at it, because every time they hop in the car it’s ‘okay, what have I got today?’

"You’ve got to push the boundaries of development and then once you’re getting close, stabilise and work at it from there in small increments."