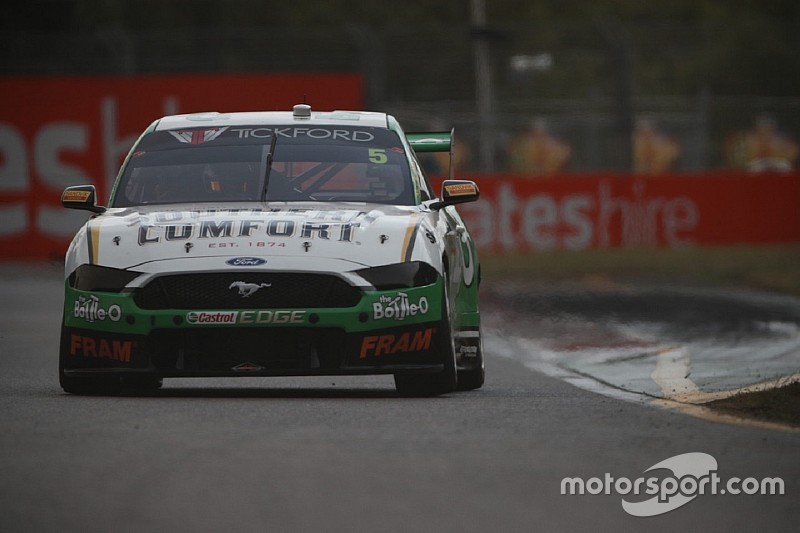 After a wet opening hit-out this morning, crews were treated to dry conditions for the second 30-minute practice.

Times were immediately 10s quicker than the opening season, Fabian Coulthard leading the way early with a 1m13.171s.

On the 12-minute mark Coulthard was bumped off top spot by fellow Mustang driver Will Davison, who moved five-hundredths clear 1m13.117s.

With 10 minutes to go Scott McLaughlin made his first appearance at the top of the times, going quickest with a 1m12.937s.

It was Holdsworth that had the last laugh, however, the Tickford driver grabbing top spot with a 1m12.677s at the flag.

“I love this track, I’ve always enjoyed it around here,” said Holdsworth.

“The Bottle-O car is really hooked up. We obviously didn’t get much of a chance to tune it today, but we’ve rolled out of the box with a pretty quick beast.

“Let’s hope we’re in the same position tomorrow after qualifying.”

Triple Eight's Shane van Gisbergen popped up in second on his final run, just 0.01s behind Holdsworth, while McLaughlin was shuffled back to third.

David Reynolds was fourth after sitting out Practice 1 this morning, followed by P1 pacesetter Cam Waters and Anton De Pasquale.

Mark Winterbottom was seventh fastest, with Coulthard, Scott Pye and Tim Slade rounding out the Top 10.

Chaz Mostert was just 14th quickest, his Tickford Mustang struggling with an engine problem for much of the session.

"We had some issues with the car which really hampered our running.

"We couldn’t do the test plan that we wanted to. In the end we changed a bunch of things and something fixed it.

"The car was running okay at the end there, but lost track time really hurts us this weekend."

Townsville specialist Jamie Whincup, meanwhile, was just 16th, missing out on starting a green tyre run at the end.

“I would have missed the finish line by half a second I reckon, but that’s the way it goes,” said the seven-time champ.

“But overall we had a good session. We tried some radical things to try and improve the car speed.

“I don’t know if they’re better or not, we’re going to have to look at the data a little bit more."