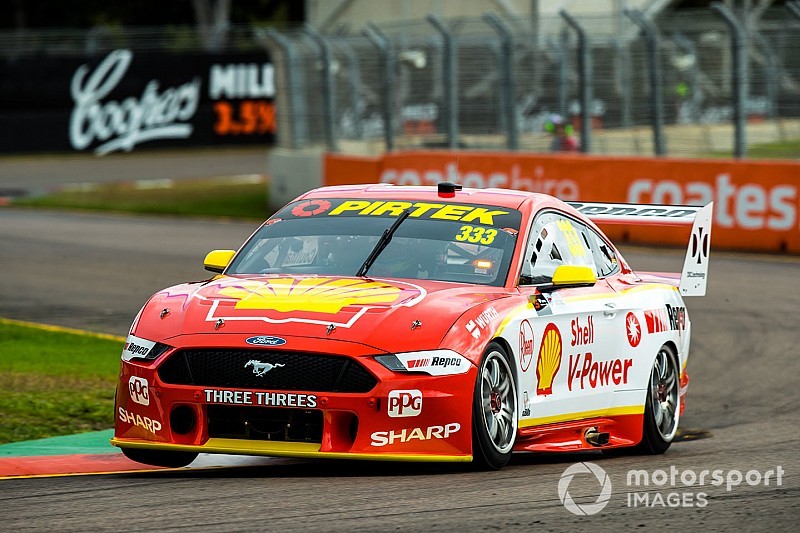 The Triple Eight Holdens set the early pace, Jamie Whincup initially quickest with a 1m13.098s before Shane van Gisbergen took over with a 1m12.974s.

The next change at the top came 11 minutes in, Coulthard going quickest with a 1m12.806s. Five minutes later Scott McLaughlin made it a Penske Mustang one-two, slotting into second, 0.05s off his teammate.

Chaz Mostert was briefly quickest as the session ticked into its final third thanks to a 1m12.640s, only for McLaughlin to lower the benchmark next time around with a 1m12.577s.

McLaughlin returned for the Happy Hour at the end of the session, improving to a 1m12.449s with a minute to go.

But it wasn't good enough to hold off Coulthard, who grabbed P1 with a 1m12.286s right at the flag.

"We've just made a couple of adjustments here and there, nothing too crazy, not far from our window," said Coulthard.

"I'm relatively happy. [My lap] was okay. You're probably still exploring the boundaries a bit seeing what you can get away with in qualifying.

"Last corner wasn't perfect, but the rest of the lap was pretty good."

Nick Percat was a very late improver to finish second, 0.16s behind Coulthard, which left McLaughlin back in third and ruing a small mistake at the final corner on his green tyre run.

"I went deep, I made a stuff-up, went wide," said the points leader.

"Fabs did a good lap so it's good to look at his data, there's definitely a lot left in my thing.

"The car was really good, I just need to put the lap together myself. I'll look at the data where we went wrong. I'm actually really happy with the car."

Lee Holdsworth was the best of the Tickford Mustangs in fourth, followed by Whincup, Mostert and Tim Slade.

Rick Kelly led the way for the Nissans in eighth, with Scott Pye ninth and Will Davison 10th.

There were some big names well off the pace, with van Gisbergen slipping all the way back to 18th, and David Reynolds just 20th.