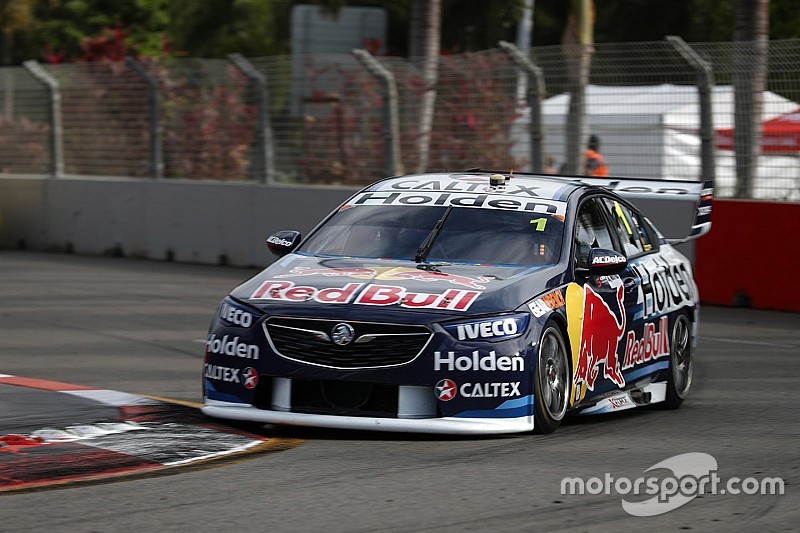 Whincup and Scott McLaughlin traded fastest times throughout much of the session, Whincup setting the early pace with a 1m12.986s before McLaughlin– who struggled with a throttle sensor issue early on – took over at the top with a 1m12.980s right after the half-way point.

Whincup improved again with 12 minutes to go, going top with a 1m12.701s, with McLaughlin hitting back a few minutes later with a 1m12.643s.

Shane van Gisbergen enjoyed the breifest of brief stints at the top with four minutes to go thanks to a 1m12.587s, only for Whincup to lower the benchmark significantly seconds later with a 1m12.243s.

That proved to be the hammer blow, Whincup ending the session more than three-tenths clear of his teammate.

"We’re on our programme, which is nice. We got through everything in P1 and P2,” said Whincup.

“We didn’t maximise in P1 but we felt like we did then. Everyone will take a step up tomorrow, but the car is feeling nice.

“After the test day and Darwin the car is much nicer to drive.”

McLaughlin ended up third having not improved on his final run, some traffic proving costly after he'd switched to a green tyre.

“I came up on that green lap and a few guys came out of the pits,” said the points leader.

“It’s just not worth risking the absolute maximum, just in case they didn’t see me, I’d have nowhere to go.

“I backed out of it and by the time we went around on the next lap the tyre pressures were too high.

Nick Percat and Will Davison made late gains to slot into fourth and fifth respectively, the latter easily the best of the Tickford-built Fords in the field.