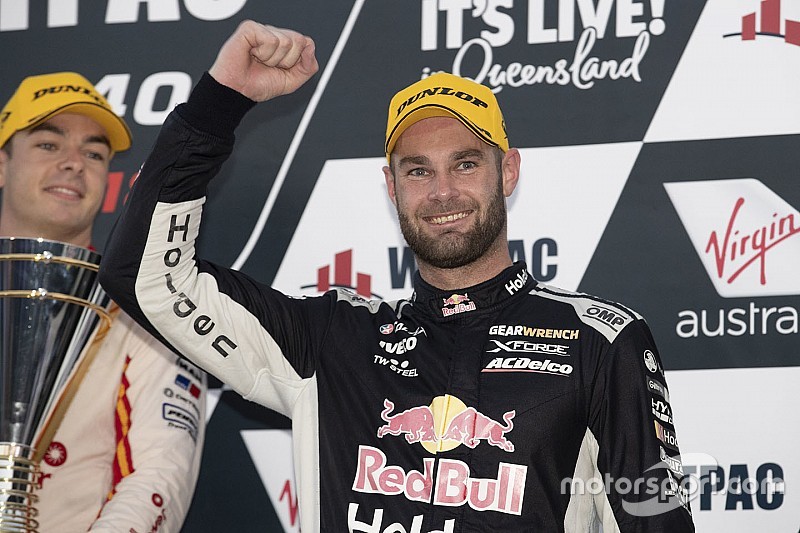 Shane van Gisbergen capped off a perfect weekend for the Red Bull Holden squad in Townsville, leading home Jamie Whincup in the team's second one-two in as many days.

Van Gisbergen controlled the first stint, making the most of a slow start by teammate Whincup from the outside of the front row to charge into the lead.

Whincup, meanwhile, dropped back to fourth behind Rick Kelly and David Reynolds, taking four laps to work his way back into second.

Once in second he was able to close to within 0.8s of van Gisbergen, before opting to pit on Lap 18. That effectively sparked a change in the lead, van Gisbergen waiting six more laps to make his stop and coming out behind not just Whincup, but Scott McLaughlin who was running a short-filled second stint to make up for a poor start.

By Lap 28 it was a Red Bull Holden one-two again, van Gisbergen slipping past McLaughlin and settling in around 5.5s down the road from his teammate.

This time it was van Gisbergen that did the closing up, a bit of lapped traffic ultimately allowed him to barge his way back into the lead at the penultimate corner on Lap 43. The Kiwi then very swiftly built up a 4.8s lead before Whincup pitted on Lap 48, van Gisbergen following a lap later and retaining the lead by over a second.

That lead got out to more like 4s as the final stint wore on, before it was decimated by a Safety Car with eight laps to go thanks to Anton De Pasquale firing Michael Caruso into an infield tyre barrier.

However van Gisbergen was up to the task of the five-lap sprint to the flag, leading home Whincup by 0.7s.

“Our cars have been awesome all weekend and it’s a good personal day for the #97 crew,” said van Gisbergen.

“They turned our car around, qualifying and race, and we came out on top. As a team, a double-one two is awesome.”

Points leader Scott McLaughlin finished up third after being forced into a recovery drive thanks to a bad start.

The poor getaway left the Penske Ford sitting 11th by the end of the first lap, the on-track recovery only getting him as far as ninth before he opted to pit on Lap 13.

Between the short-fill and the undercut he emerged from the spots in second, but was quickly passed by Shane van Gisbergen. He even came under some pressure from Craig Lowndes late in the stint, although making their second stops together on Lap 41 gave McLaughlin some breathing room as they re-joined.

In the end third was as far as he could go, McLaughlin holding off Lowndes, Chaz Mostert, and David Reynolds for the final spot on the podium.

“The crew gave me an awesome strategy and the tyre life was fantastic,” said McLaughlin.

“I didn’t get the best start and lost a few places, but I’ll take third after today. It’s a win for us.”

Rick Kelly finished the race seventh on what, outside of that, was a difficult day for Nissan Motorsport.

Contact between the two Altimas left Caruso facing the wrong way, and de Silvestro with a 15s penalty. De Silvestro ended up finishing down in 22nd, while Caruso was left with a heavily damaged Altima thanks to his late clash wth De Pasquale.

Dropping points to the Red Bull Holdens for a second consecutive day saw McLaughlin's points lead over van Gisbergen cut to 131, with Whincup still in fourth behind Reynolds, but his deficit reduced to 403.