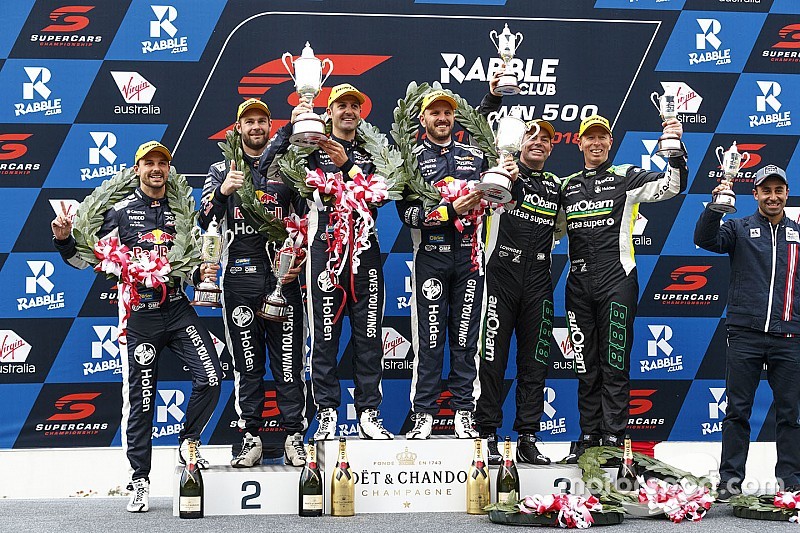 All three of Triple Eight's current co-drivers drivers are open to returning to the squad for next year's long-distance races, despite there being potentially just a single seat on offer.

The powerhouse Supercars outfit will definitely have a new-look enduro line-up for 2019 thanks to Craig Lowndes' retirement from full-time competition, the veteran set to slot in alongside either Jamie Whincup or Shane van Gisbergen.

That means the Lowndes/Steve Richards partnership that has existed since 2014 will certainly be broken up, while the Jamie Whincup/Paul Dumbrell combo, first established in 2012, is also in danger of being split.

It also casts doubts over the continuation of the new Shane van Gisbergen/Earl Bamber partnership, which got off to a successful start by splitting the other T8 cars in the team's remarkable podium lockout at the Sandown 500 last week.

To further complicate matters there could be just a single enduro seat on the market next season, with Triple Eight understood be slimming back to two cars and Lowndes locked in for one of the Red Bull Holdens.

But despite there being limited spots on offer, all three of the current co-driver roster are open to a return.

According to Richards, continuing the strong form shown at Bathurst will be key to working on a fresh deal with the team.

The four-time Bathurst 1000 winner also says he'll look elsewhere for a drive if he doesn't feature in T8's plans.

"I mean first and foremost, if you want to be with these guys you’ve got to get results," he said after finishing third at Sandown.

"I’d love to stay with Triple Eight, I’ve had a great five years with them. But if it’s not Triple Eight I’ll go and do something else, with someone else."

Dumbrell, notoriously coy on his driving future, says he'll sit down with team boss Roland Dane to talk about 2019 after this year's Gold Coast round.

"I’m on record to say I’ve done seven one-year deals with RD and he’s had me back seven times so he’s either made six mistakes or six right decisions," said the Sandown winner.

"Overall, we’ll play it by ear. All the speculation every year come this time, for me it ranges on family, business, you know obviously performance as well.

"So come post [Gold Coast], I'll sit down with RD and make a call on what the future holds."

Le Mans winner Bamber added that his Sandown debut has left him keen on more Supercars action, and that if it works with his Porsche schedule he'll gladly feature in the discussion for any available spots at T8.

"[It's] definitely whet the appetite," he said.

"At the end of the day I drive for a different manufacturer full-time, so have to see how the schedules work. This year is the first ever time the schedule worked, and then we'll see if it works for next year.

"If I have a chance I’d like to be back. Let’s see at the end of the enduros."