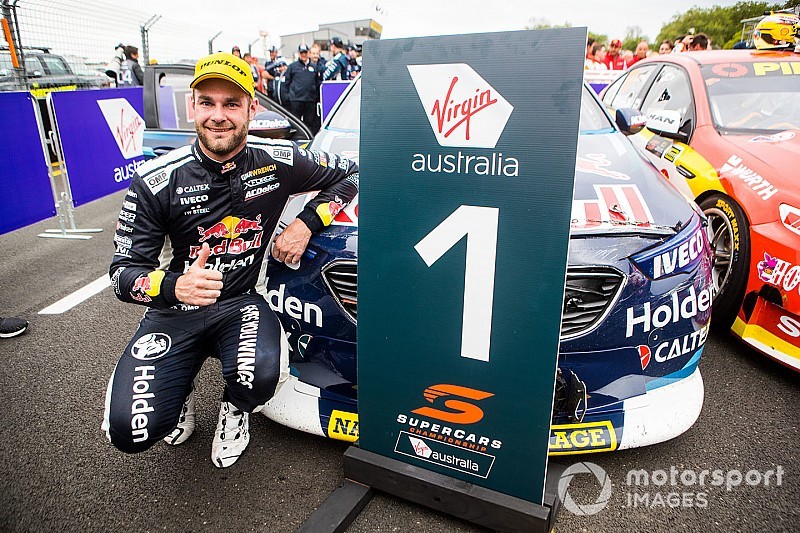 Triple Eight team manager Mark Dutton admits the squad was worried about a penalty in the moments following the controversial Shane van Gisbergen pitstop at Pukekohe.

The frantic title fight between van Gisbergen and Scott McLaughlin was given a dose of controversy in New Zealand on Saturday, van Gisbergen's car caught by TV cameras with its rear wheels turning during his second stop.

While seen to many in pitlane as a cut-and-dry drive-through penalty, Deputy Race Director Michael Masi opted to defer an investigation until after the race.

Masi later decided not to refer the matter to the stewards, a decision that was unsuccessfully protested by DJR Team Penske.

It wasn't just rivals that thought an on-the-spot drive-through might be headed van Gisbergen's way, either. Dutton says the #97's pit crew reported wheel spinning straight after completing the stop, with the team concerned that the DRD would penalise the car mid-race.

"We were a little bit concerned, for sure," said Dutton.

"The pit crew actually came in and told me there was a little rotation of the wheel.

"It’s very hard for them even at the coal face to know how much has happened. But when we had the chance to watch the super-slow-mo, counting the spokes and the labels on the tyres and that, there was surprisingly little. It was just over a quarter of a rotation.

"It looked a lot worse than that at full speed."

Dutton also praised Masi for waiting until after the race to properly investigate the issue, given that a drive-through would have given McLaughlin a huge advantage in the title fight heading to Newcastle.

"I said that in the stewards meeting," he said. "It wasn't sucking up, but I told Michael, 'good on you for taking the time to make the right call'.

"They have evidence there, video and data at their disposal, and he used it and made the right call.

"I've been mistaken before when you first see it and go 'oh wow, that's done a heap of revolutions'. And then you watch it a second time and it was a quarter-turn. But in the heat of battle, your eyes can exaggerate these things.

"So good on them being level-headed and using the tools at their disposal."