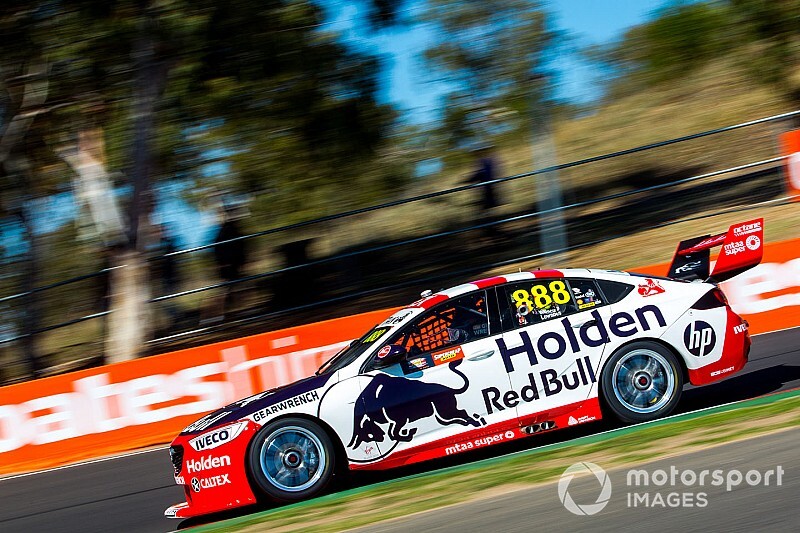 Triple Eight made its decision to let Jamie Whincup off the leash too late in the closing stages of Sunday's Bathurst 1000, says team manager Mark Dutton.

Whincup and co-driver Lowndes were locked in a dead-even battle for the lead with the Scott McLaughlin/Alex Premat car until the Lap 140-mark, at which point the strategies for the two contenders deviated.

While McLaughlin went into fuel-saving mode, DJR Team Penske hoping his Lap 135 stop would get him to the end, Triple Eight instructed Whincup to push, committing to another stop regardless of Safety Cars.

As it turned out the former was the more effective strategy, Whincup dropping to fourth thanks to a Lap 151 stop, while a pair of late cautions helped McLaughlin save enough juice to make it to the finish.

According to Dutton, Triple Eight made the right call at the wrong time.

He says the team waited too long to tell Whincup to drop the hammer, and had it been made earlier, the seven-time series champ may have been able to build a big enough gap to make that extra stop and retain the lead.

"We’ll obviously review. I think we should have made it earlier," he said.

"The time we lost not making it earlier – and that’s a collective, we’re a team making these decisions together – means that there’s a chance we would have come in, pitted and got back out in the lead and cruised home.

"You need about a 40-second lead, roughly, and when you see the difference in times you can do, we were doing, I think, 1.8 faster than McLaughlin at some stage just before the yellows.

"It is definitely possible, but just not [this time]."

Dutton added that the McLaughlin approach of saving fuel and hoping for Safety Cars wasn't an option for the #888.

"Because we were the car in the front pushing the air, it’s so hard," he said.

"You’re consuming a lot of extra fuel compared to everyone else.

"It’s tough. The numbers we had to hit were near impossible if you were leading at that stage, hence the call."

With the #888 car dropping back after that final stop, the Shane van Gisbergen/Garth Tander car became the team's best entry in second place.

The #97 was one of the cars potentially implicated when Fabian Coulthard was told to slow behind the Safety Car, the delay avoiding a need to stack behind Whincup, but also negating any fuel advantage earned from a Lap 123 stop.

When asked for a flash assessment of the impact of the controversial call, before a team orders breach had been made official, Dutton didn't feel it was overly costly.

“But that’s looking at it on the fly. Because you slow down the whole field, not just #97… we need to look at it.”