TeamVodafone’s Craig Lowndes has made a clean sweep of the Coates Hire Ipswich 300, winning the third and final race of the event.

In front of an enthusiastic crowd, Lowndes chalked up his 80th career victory after holding off a hard-charging Tim Slade.

“It’s our home track and the guys did a sensational job here,” said Lowndes

“We had great strategy going on and again to our guys, thank you it was a fantastic day.”

It’s our home track and the guys did a sensational job here.

Slade pushed Lowndes all the way and the pair finished the race over 30 seconds ahead of third-placed Shane van Gisbergen.

His second place finish caps off a stellar weekend for the Lucky 7 racer.

“Ross (Stone) talked about the complete weekend for me and that’s what it was - we haven’t ventured outside the top three all weekend,” said Slade.

“Three podiums and Shane’s up here as well, so a big thanks to the guys.”

It was a tough day for Whincup, who struck problems on the warm up lap and was forced to pit lane. 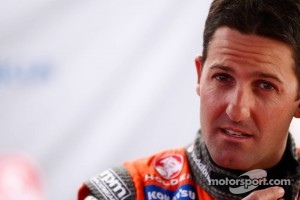 It was a rare mistake from TeamVodafone who mistakenly left a trumpet cover on the engine as the car lined up for the race start.

Whincup rejoined at the rear of the field and fought to stay on the lead lap, then charged through to tenth.

“Our start and finish were not so flash today,” admitted Whincup.

“In the end I unfortunately had contact with Rick Kelly so apologies to his team, I didn’t mean that.”

Whincup’s series lead has been reduced to 98 points over teammate Craig Lowndes.

The V8 Supercar Championship Series heads into the season of endurance, with the L&H 500 Phillip Island next month.