SLADE BREAKS THROUGH FOR FIRST PODIUM 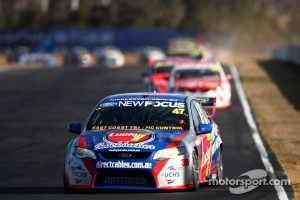 Starting on the front row for race one, Slade kept pole-sitter Craig Lowndes honest for the duration of the race, and more importantly was able to pull a gap of almost six seconds to third-placed Jamie Whincup.

After the mandatory 15-minute break between race one and two, it appeared Whincup had made some positive changes and passed Slade in the opening laps, but a determined Slade had the speed and talent to stay with the leaders for the duration of the race to record his second podium in as many races.

Slade and his #47 Lucky 7 Racing Falcon once again displayed the blistering speed he enjoyed at Townsville last month, and with Slade at the wheel, #47 hasn’t dipped below fourth fastest in any of this weekend’s sessions. Tim’s results today move him into 13th place on the Championship standings, which is a brilliant rebound after slipping to 23rd earlier in the season.

Shane van Gisbergen in the #9 SP Tools Racing Falcon is still on the hunt for more speed after today’s first two races – finishing the 22-lap sprints in 11th and eighth places respectively. While the Triple 8 duo of Craig Lowndes and Jamie Whincup have stretched their lead in the Championship, van Gisbergen luckily maintains his third place on the points table.

Alex Davison has also had a tough weekend so far, with his #4 IRWIN Racing Falcon also falling short of his expectations, posting a 12th place in race one and 22nd in race two. Although his car is looking worse for wear after several skirmishes, Davison and his #9 crew are confident of making the right changes tonight for a stronger showing tomorrow.

“Today is a dream come true really. We feel this has been a long time coming … the car has great speed for the majority of the races this year and through a bit of bad luck at times we haven’t quite made it but it all came together today and it feels great. I couldn’t ask for a better day … second in the first race and another podium. I can’t say enough about all my guys, they’re the best bunch in pit lane I reckon .”

We struggled to make an impact today.

“We struggled to make an impact today. The car wasn’t where we wanted to be and sadly we weren’t competitive enough. Essentially we were fighting a lot of understeer – she just wouldn’t turn in but we’ll be able to rectify that tonight and come back tomorrow with a better shot. I’m really happy for Tim today though and all the #47 crew – they have been doing a great job and really deserve it.”

“Once we got going we were quite strong and the car looked after its tyres well, we certainly came on strong at the end. It wasn’t a bad race car in race one. Then in race two I passed Karl Reindler into turn four, then in turn five we were side by side. He just kept turning down on top of me, kept squeezing me to the inside of the track and I was up on the kerb and (he) kept coming down until we hit. He spun, and I was unscathed at that point, but then got hit very hard from the back, destroying the back of the car. We finished the race but there was a lot of damage.”