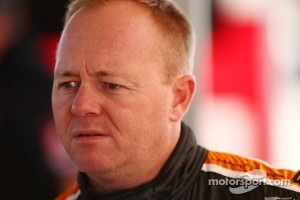 In the morning's qualifying session the Jana Living Racing driver struggled with grip and could only manage 26th fastest. Race One did not see any improvements but small adjustments before Race Two transformed the car.

Bargs scythed his way past 11 cars to claim his 13th-place finish but is now awaiting a stewards' enquiry into an incident with Garth Tander in the dying stages.

Qualifying for tomorrow's race starts at 11.20am.

"Garth was running wide into that last corner and he came back across as I was trying to pass. There was some contact so I got off the throttle and got hit from behind. That passed on through to Garth and turned him around. It wasn't what we had intended but I was off the throttle at the time I got the hit so I couldn't do much about it.

"We went into the race with a few changes after qualifying but I struggled big time. It was much better in race two and we could move our way up a bit."