Championship up for grabs, Lowndes wins race 1 in Sydney

Only 83 points separate Whincup and Lowndes for the 2011 title

Craig Lowndes accomplished his first goal of the weekend’s V8 Supercars Australia season finale on the street circuit in Sydney, Australia. He scored 140 points which allowed him to shorten the gap between him and points leader Jamie Whincup by taking the 2011 penultimate race victory. The two TeamVodafone team mates have one final race on Sunday to determine who will earn this year’s championship with Whincup holding a slight edge of 3078 points to Lowndes’ 2995.

“The car’s been sensational, but I was down on myself after qualifying,” said Lowndes. “I knew we had a lot more in it. There has been a lot of carnage out there, but it was a hell of a race and we got the job done. I’ll try and have a good sleep tonight!”

Driving his #888 Holden Commodore and starting in tenth on the grid with his main rival starting fifth could have caused Lowndes some concern. Yet in this series, anything can happen and the drivers push to the limits as there are no team orders. Lowndes had a bit of luck on his side as Whincup ended the race in 20th position; garnering only 45 points. 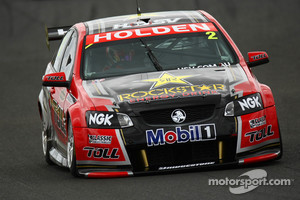 Garth Tander finished second in his #2 Toll Holden Racing Team Commodore; missing the win by 0.8 seconds. Third went to Stone Brothers Racing’s Shane Van Gisbergen in his #9 Ford in a dramatic finish. Rounding out the top five were Michael Caruso in the #34 Fujitsu Racing GRM followed by third place in the standings, Mark Winterbottom in the #5 Ford Performance Racing Ford Falcon.

Winterbottom, also known as Frosty, has to watch his own back as he now has 2560 points but van Gisbergen is only 17 points behind him while Tander has 2526 points. So while the two TeamVodafone drivers chase after the crown, there is an even tighter fight for third in the final standings.

Earlier today at the Homebush circuit, Will Davison won the pole in the #6 FPR Falcon and in the first laps was able to hold off the challenges by his competitors but called in to his team stating he had steering problems, which ended up taking him out when he slammed into a tire wall. In the meantime van Gisbergen was holding off a charging Whincup but several times he kept the points leader at bay.

Whincup appeared to make a rare error with approximately 22 laps completed. Lowndes was in pit lane for his service of tires and fuel when the team was surprised as Whincup needed to come in; but the V8 Supercars only allow one car from each team one pit stall, so therefore Whincup had to sit idly by. It was discovered that the points leader had right front damage to his Commodore. Once Lowndes had left the team’s pit area, Whincup ended up going to the garage.

Later it was reported that Whincup had a damper problem and ended up making slight contact with the Turn 5 wall. Once his pit area had opened, he headed to the garage. He returned after the repairs were made, plus taking the pit stop for tires and fuel; albeit it four laps down from the leaders. With the door wide open, Lowndes drove his heart out to take the win. 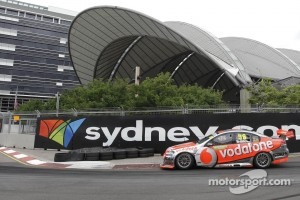 “It’s not over until it’s over,” said Whincup. “It’s a tough track and tough on the cars. We’ll tune it up and if the car is as strong as it was today, we’ll be looking pretty good.”

The closing laps saw drivers drop down the scoring charts due to lack of fuel, including the lead pack. Caruso was aiming for the win until Lowndes zoomed past to take the lead, and then while trying to keep Tander behind him; Caruso had to back off due to fuel shortage on the final lap.

Van Gisbergen managed to play the fuel game correctly and was fifth in the closing laps, and on the final lap, it appeared he would not be able to overtake Rick Kelly or Caruso until Kelly ran out of fuel and with Caruso sputtering, van Gisbergen was able to take third on the final corner in dramatic fashion when he lightly touched the Ford, sending Caruso into the air. Caruso was able to milk his Falcon to the finish line but he missed out on the podium finish.

“It was great to pick up this result after last years’ disappointment. After the incident in the second stint I ran way off line and picked up some debris on my tires which slowed me down for a few laps – it was a bit weird because some laps it was fine and others it didn’t feel too good but we managed to work through it. We weren’t in the best of positions after that to be saving for fuel and pushing hard at the end, but it worked out ok,” said van Gisbergen.

Sydney sets the stage for final battle for the championship