It is with huge regret and sadness that BJR confirms the death today of team-mate Jason Richards after a courageous 13-month battle with cancer.

Jason was diagnosed with Adrenocortical Carcinoma in November 2010. He has since undergone surgery, chemotherapy and several drug trials, as well as travelling to Michigan for expert advice.

No interviews will be given at this time by the team or family; please respect their privacy.

A condolence site has been set up at www.teamboc.com.au where fans can leave messages. Alternatively people can leave posts on the Jason Richards Fan Page on Facebook.

All money collected from recent fund-raising will now be put in a trust for Jason's two children, Sienna (4) and Olivia (1), and his wife Charlotte.

Press enquiries can be forwarded to Cole Hitchcock (ch@v8supercars.com.au) who has Jason's full career biography including imagery and tributes from the V8 Supercar community. 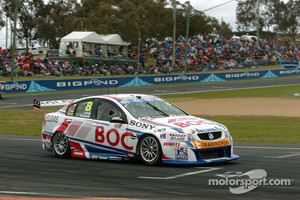 In the competitive world of V8 Supercars Jason was a rare breed – a driver that could tread the fine line between rivalry and friendship. He was never secretive, selfish or bad-tempered and had endless enthusiasm and energy for his job and team.

The history books will not do him justice. Given the right equipment JR was easily a front-runner but chose team loyalty over personal gain, determined to work with his crew to reach the front of the grid together.

Through the highs and lows of racing, JR's uplifting presence and casual, self-effacing wit were unwavering and his effect he had on team morale is irreplaceable.

He will forever be a member of the Jones family and this is a tragic day in the team's history.

Ricciardo: F1's got its danger/safety balance spot on