Point of Interest: There are three Western Australian drivers competing full-time in the V8 Supercars Championship in 2011. Former series champion Garth Tander (Toll Holden Racing Team), Karl Reindler (Fair Dinkum Sheds Racing) and Dean Fiore (Triple F Racing) all get the chance once again to compete on their home circuit. Tander won the event overall with a clean sweep of all three races in 2007.

Circuit Description: Tough and tight, the Barbagallo circuit (formerly known as Wanneroo Raceway) was resurfaced a few years ago and initially gave very good grip. However, as the years have ticked by, the surface remains a difficult one for drivers and engineers alike. Passing opportunities are generally limited to turns one, six and seven under brakes, with the surrounding sand keen to catch out any driver who strays from the bitumen. The circuit was absent from the 2010 schedule but returns with a range of improvements planned over the next few years.

1. If ever there’s a man who has a strong record at a particular circuit on the V8 Supercars Championship, TeamVodafone’s Craig Lowndes must be that man and Barbagallo must be that track. 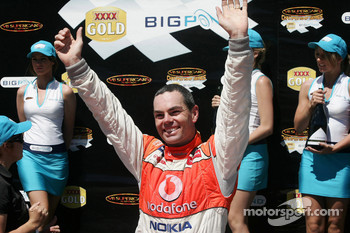 Craig Lowndes takes out the win for Team Vodafone

- The three-time champion has a monumental record in Perth in V8 Supercar racing and won the last race in the Championship’s last visit in November 2009 (right).
- In 13 previous events at Barbagallo, Lowndes has won an incredible 13 races from 37 started (35%). Twelve of those he won in succession from 1996-2000 (he missed 1997 while racing overseas) before taking his 13th win last year in the Sunday race.
- He’s only qualified outside the top 10 in Perth once – 2002 – and has four pole positions at Barbagallo.
- Lowndes now sits third in the V8 Supercars Championship, 102 points - and within striking distance - of teammate Jamie Whincup.

2. The three-race format returns this weekend in the V8 Supercars Championship for the first time since 2008 – and a range of tyres will be used as well as a different qualifying format for Sunday.

3. Kiwi Shane van Gisbergen is still on a high after his first-ever V8 Supercars Championship race win at the ITM400 Hamilton in his native New Zealand (right). 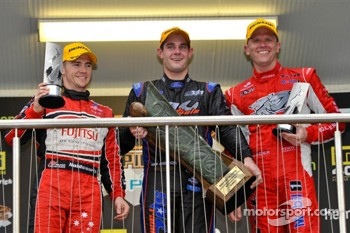 - The 21-year-old became the 61st different race winner in the history of the Australian Touring Car Championship/V8 Supercars Championship since 1960.
- It was the first race win for Stone Brothers Racing since James Courtney won at Queensland Raceway in 2008. It broke a drought of 76 races and was also the first win for Ford this year.
- He became the first Kiwi to win a V8 Supercar race in New Zealand since Greg Murphy in 2005.
- Turning his attention to Barbagallo might just bring van Gisbergen back to earth. In two previous visits (2008 & 2009), his best qualifying result and race finish is 10th.

4. Sunday’s Race 8 of the season is a special milestone in the history of the Australian Touring Car Championship/V8 Supercars Championship.

6. Less than one race win covers the top eight drivers in points in the V8 Supercars Championship with six of 27 races completed – making for a much tighter points battle than this time last year. 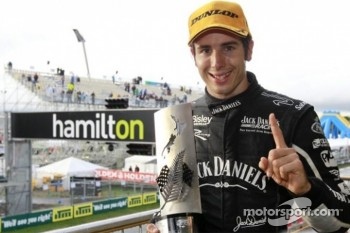 - Jamie Whincup leads by 81 points over 2006 champion Rick Kelly (right), who took Kelly Racing’s first race win in New Zealand.
- But it’s the tight 51-point spread between Kelly and eighth-placed Alex Davison that sees seven drivers less than one race win (150 points) off the championship lead.
- This time last year after six races, just three other drivers were within one race win of Whincup’s title lead. This year that number has more than doubled to seven.

7. A range of drivers have historically struggled – or had results weaker than their overall record - at Barbagallo Raceway and plenty of them are keen to improve those statistics this weekend.

8. Toll Holden Racing Team and Jim Beam Racing (Dick Johnson Racing) are locked in a close battle for the most podium finishes in championship history at Barbagallo.

- Both teams have enjoyed great success over the years in Western Australia, with DJR taking a total of 14 podium results away from Barbagallo since Dick Johnson’s first in 1981. His son Steven scored the team’s latest podium there in 2009 with a second-place in the Sunday race.
- On the other hand, Toll HRT has collected 16. Peter Brock took their first in 1995 with a second-place and Garth Tander their most recent with a third-place in the Sunday race in 2009.

9. Three drivers are making their first start in a V8 Supercar at Barbagallo Raceway in the Trading Post Perth Challenge. 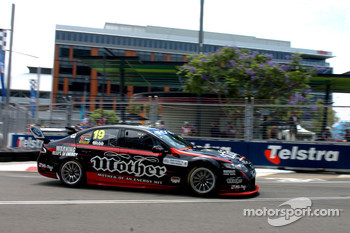 - James Moffat (Jim Beam Racing), Jonathon Webb (Mother Energy Racing Team) and Karl Reindler (Fair Dinkum Sheds Racing) are all having their first look at the circuit in a V8 Supercar.
- Moffat has raced there previously in Formula Ford (winning the round in 2007) and Porsche Carrera Cup (finishing third in 2008).
- Webb (right) has raced at Barbagallo in Carrera Cup (finishing third in 2005), while Reindler has competed in a range of categories there in the past given it’s his home circuit.
- The last time the V8 Supercars visited Barbagallo in 2009, Reindler raced a MINI Challenge car with his brother Chris.

10. The Fujitsu V8 Supercar Series will be the main support to the Trading Post Perth Challenge and is making its first-ever appearance in Western Australia.

- A field of 24 cars has entered for the second round of the series, led by points leader Nick Percat in the #222 Coates Hire Racing Commodore.
- Paul Morris returns to the Fujitsu Series for the first time this year. His Commodore will run under the ‘Green Machine Racing’ banner promoting Perth boxer Danny Green’s upcoming title fight in Sydney in July.
- Of the drivers entered for this weekend’s round, only Morris, Andrew Thompson (Monster/Triple Eight) and Jack Perkins (Supercheap Auto/Sonic) have previously raced a V8 Supercar at Barbagallo.
- A range of Western Australian drivers are among the field, including Todd Fiore (Triple F Racing) and Nathan Vince (Batavia Coast Motorsport). Brett Stewart makes his debut (Formula Tech Racing) in an ex- Paul Morris Motorsports VE Commodore to bring the number of local drivers to three.