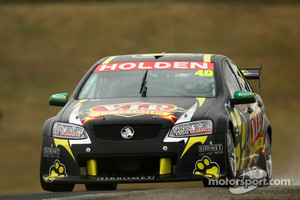 Today’s (Saturday) Shootout appearance was Owen’s first at the ‘Great Race’ and the result puts the #49 Commodore in prime position, on the third row of the starting grid, and more importantly, the clean side of the circuit.

“It’s all gone to plan so far,” commented Owen.

“We wanted to be inside the top-10 for the start and keep a heap of tyres for the race and it’s worked out perfectly. We’re starting in position six on the grid and we’ve got a bunch of fresh tyres left in the bank, so the plan’s set us up nicely for tomorrow’s race.”

This tenth round of the International V8 Supercar Championship has thrown all four seasons at crews with today’s results slightly gifted from the gods for most, when rain began to fall on the remaining three drivers completing their Shootout lap.

Not to take anything away from Owen, this was his first Bathurst 1000 Shootout appearance and his third consecutive for the 2011 season.

“This is my first Shootout appearance at Bathurst and it feels pretty special but it’s also our third straight appearance this year in the V.I.P. Petfoods car so we’re regular visitors to the Top-10 now and on the way up,” he added.

All the action from the ‘Great Race’ begins tomorrow at 10.30am. You can catch all the action LIVE on the 7 Network or in full HD on 7mate. *check local TV guides for further details.

Tyrrell sponsors and suppliers for 1995