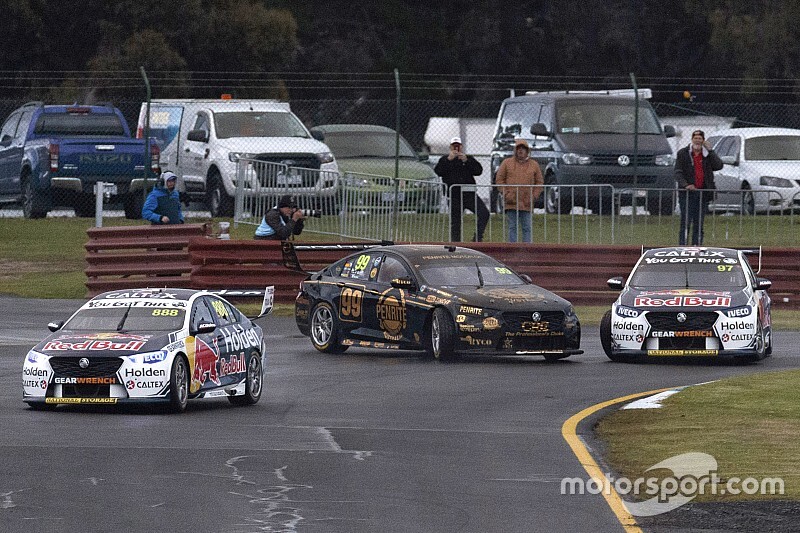 De Pasquale and Shane van Gisbergen clashed on the way into Turn 1 at the start of today's second qualifying race, the Red Bull Holden sliding into the side of the Erebus entry in tricky wet conditions.

Surprisingly it was De Pasquale that copped a penalty for the contact, the Erebus driver slapped with a highly unexpected drive-through.

That came as hugely surprising news to van Gisbergen, who, after retiring his car due to damage, told Fox Sports that the crash was entirely his fault.

"I'm guttered, I stuffed that one up royally," he said.

"I've just seen that they gave Anton a drive-through. I can't believe that. One-hundred percent on me, clear as day. I blocked Scotty [McLaughlin] and then just misjudged [the braking].

"I don't know what they're doing giving him a penalty..."

The admission prompted Baird to put his own hand up, the series DSA heading straight to the Erebus garage after the race to apologise to De Pasquale.

"I looked at the turn-in angle, which is fairly steep. Anton and [team boss] Barry [Ryan], they agree with me on that. I just didn't take the closing speed of Shane [into account].

"I even went back through the timing and you can't give the time back. It would only make one spot difference. His day was wrecked when the collision happened with Shane, I just added to it a little bit."

Baird also defended the call to make a decision in-race, rather than wait for a post-race investigation.

"When we were doing post-race penalties people weren't happy with that," he said.

"We've tried hard to have the decisions made between the goal post, really, not carrying on after the game. You pull the trigger and I guess you try and keep one half happy by making the decision straight away, and another time you make it too late and they're not happy about that.

De Pasquale added that he's satisfied with Baird's explanation, joking that he's now got a misdemeanour up his sleeve.

"I haven't seen any of the footage, I obviously spoke to Bairdo and everyone said it was not my fault," he said.

"He just said he mucked up and it's his fault, so I just told him he owes me one..."