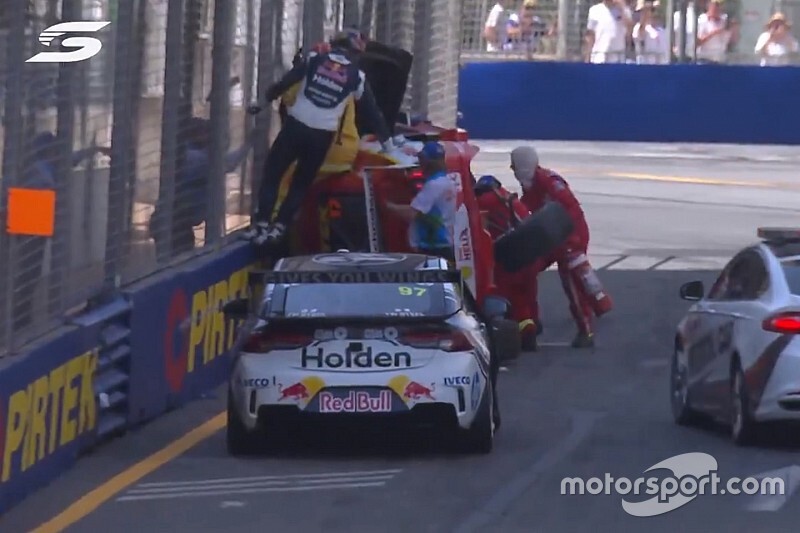 Shane van Gisbergen was one of the first on the scene after Scott McLaughlin's "shocking" crash on the Gold Coast.

The Red Bull Holden driver came to an immediate stop when he reached the scene of the crash, racing over to the rolled Mustang and climbing up on the fence to check on McLaughlin.

The first of the medical and safety crews had arrived moments earlier, van Gisbergen leaving them to extract McLaughlin once he knew the driver was okay.

"It's not a nice feeling to come around the corner and see one of your mates on his side, way after the corner," van Gisbergen told Fox Sports.

"It must have been a big shunt, so I helped him out. The medical team were there fast, all the firies and stuff. I saw him get out.

"He was pretty shaken, but he's okay. Not nice."

Van Gisbergen says he didn't know exactly who it was at first, but that it wouldn't have mattered anyway.

"It's irrelevant who it was," he said. "When I first saw it I just wanted to get there to help. You'd do it for anyone in the field.

"It wasn't a good thing. I don't know what to say, it was shocking."

Andre Heimgartner had the best view of the crash, having been sat behind McLaughlin as it unfolded.

"It was pretty crazy," said the Nissan driver.

"I was right up his bum going into that section, I was like 'I better back off a bit in case something goes wrong, so I don't become part of the accident'.

"It was pretty violent. It was something that just kept getting worse as I was watching it.

"First he hit the inside wall, I thought 'ah that's not good', and then he shot into the outside wall and we know what happened from there.

"It's horrible to see something like that. Obviously he's been pushing the limits this weekend, like we all have."