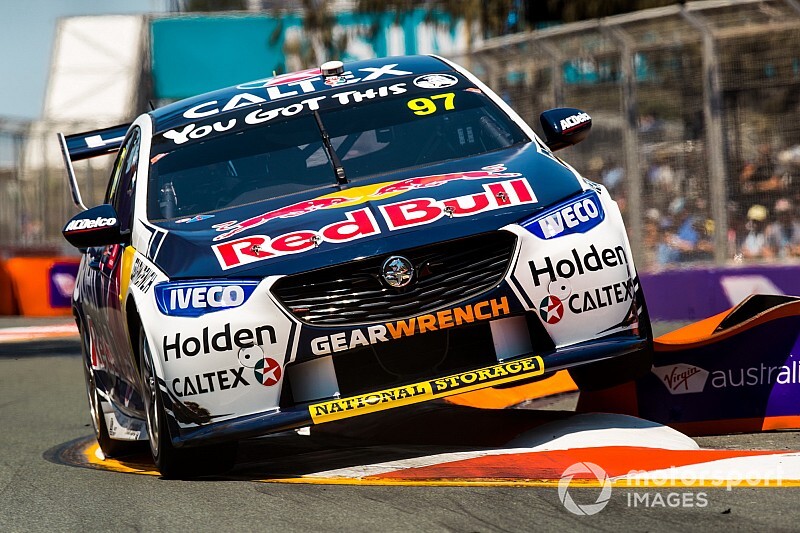 Shane van Gisbergen has confirmed that he was instructed not to try and pass Jamie Whincup in the closing stages of today's opener on the Gold Coast.

With the Whincup/Craig Lowndes car having pit priority throughout today's race, van Gisbergen and Garth Tander opted to run long first and second stints, which gave the Kiwi a tyre advantage for the run home.

That almost paid significant dividends in the closing stages, a late Safety Car leaving van Gisbergen parked under Whincup's rear wing, with better tyre condition, for a 10-lap sprint to the flag.

However the anticipated attack from van Gisbergen never materialised, the #97 appearing to hold station behind Whincup as they secured Triple Eight's first one-two finish in over a year.

Speaking post race, Whincup admitted that he knew his teammate had made his life easy after the restart.

"Shane was obviously firing at the end there on better tyres and he was quite kind to me with 10 laps to go," said Whincup.

“I was told to go flat out so I just went flat out in front and tried to hold position."

Van Gisbergen was then asked if he was told to hold position, to which he replied: "Yep".

"Initially it was a stink but it’s more important [to get a] one-two for the team. And seeing everyone at the podium, it was well worth it.

"I’m a team player, that will pay back one day as well. It’s all worth it."

Van Gisbergen has been on the right end of Triple Eight's strategic positioning as recently as last season, Whincup having let his teammate through for second place on the Sunday at Pukekohe as he battled Scott McLaughlin for the title.

And earlier this year there was confusion over a team instruction within the T8 garage, Whincup having seemingly refused to let van Gisbergen through in Perth despite the Kiwi having better tyre quality.

A change to the team orders rules made at the end of 2017 means teams can legally switch or hold positions between its own cars, but can't interfere with other teams or cars.