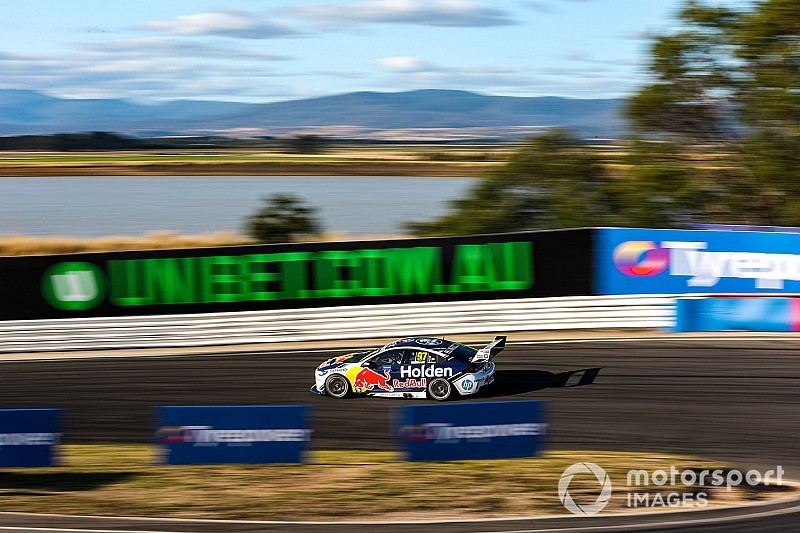 Concerned about light rain during the final stint of today's 200-kilometre race, van Gisbergen asked T8 team manager Mark Dutton to ditch the high-tech radar and stake out in sight of Symmons Plains' Turn 6 to keep tabs on the conditions.

Speaking after the race, van Gisbergen said that the piece of mind played a crucial role in his win, helping him stave off 'flashbacks' of his missed opportunity at the Tasmanian circuit in 2016, when he was caught out by oil and debris at the hairpin while holding a comfortable lead.

“I was just having flashbacks of 2016, when I lunched it with a couple of laps to go,” said van Gisbergen.

“I was glad I had a couple of seconds lead, but being a pioneer in those conditions is so tough, I didn’t have anyone to reference off, I didn’t know where to brake.

“I got 'Dutto' to go down to Turn 6 and he was ready on the radio in case people started going off.

“Once I knew he was there I was more confident, but in those laps I was just saving tyres. Once it dried up I stepped on it a little bit.”

Dutton confirmed that he watched the end of the race from the pitwall rather than in the garage, that being the best way to judge the inconsistent conditions on offer at Symmons Plains today.

"I was standing on the wall looking at Turn 6," said Dutton.

"It was a good call from Shane, to just let him know if anyone speared off.

"The quickest way to know is not to rely on the TV to show you a replay, you just stand outside and watch the weather.

"There was no clear front coming through today. When it's a clear front everyone just watches the radar, that's the best thing to do. But when it's like this, how much the clouds are opening above you, you just go outside, stick your tongue out and see how wet it gets."

The rain never got heavy enough to warrant a switch to wet weather tyres, van Gisbergen ultimately cruising to a 5s win over Fabian Coulthard and David Reynolds.

The win broke a seven-race winning streak for the Ford Mustang, coming off the back of controversial centre of gravity changes made in the lead-up to the rounds.