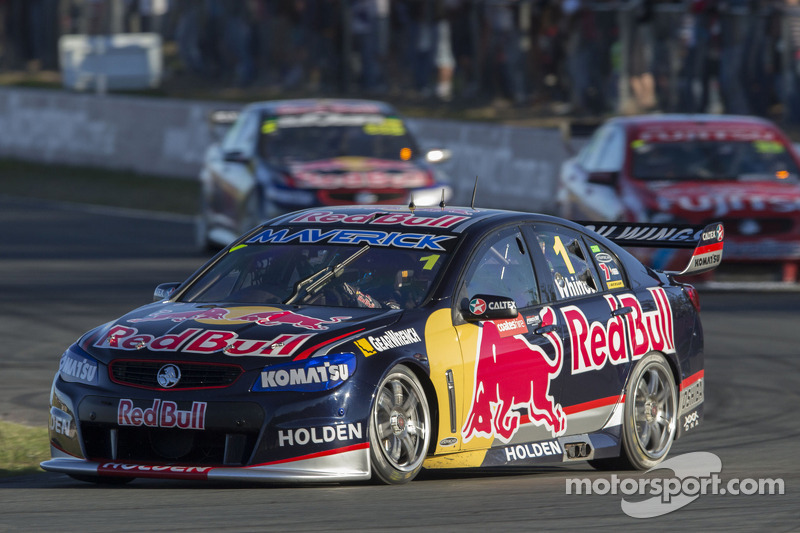 Jamie Whincup and Paul Dumbrell emerged victorious in the opening round of the PIRTEK Enduro Cup for V8 Supercars.

After a gruelling 500 kilometres Red Bull Racing Australia's Jamie Whincup and Paul Dumbrell emerged victorious in the opening round of the PIRTEK Enduro Cup for V8 Supercars at Sandown Raceway today.

It wasn’t all plain sailing for multiple V8 Supercars champion Whincup though, as a pitlane penalty dropped him to 25th mid-race. 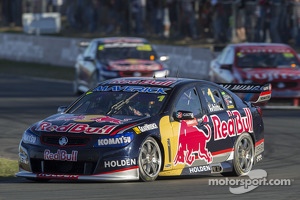 Nevertheless in a remarkable drive, Whincup and Dumbrell raced their way back through the field thanks to a clever pitstop strategy and a flawless on track performance. In the closing stage, Whincup hunted down and passed his teammate Craig Lowndes (partnered by Warren Luff), who finished second with Ford’s Will Davison (partnered by Steve Owen) just getting his oil starved Falcon home in third. The Mercedes E63 AMG of Lee Holdsworth and Craig Baird finished a close fourth giving Erebus Racing and the Mercedes its best result for the year.

Whincup’s chances of victory looked bleak before the halfway mark, with a late decision to drag co-driver Paul Dumbrell out of the car at the third pitstop, resulting in it being left in gear with the rear wheels spinning and a resulting drive-through penalty that put Whincup in 25th.

Despite an absence of Safety Cars, Whincup clawed his way back to victory passing Lowndes with little over 10 laps remaining as the #888 entry began to struggle on fading tyres. Lowndes cruised home second ahead of Will Davison, who made the finish despite the oil leak.

Earlier, Davison’s race looked all but over after his car’s first pitstop, where it had fallen to the back while sitting behind the sister entry of Mark Winterbottom/Steven Richards.

The first full-course yellow had been called on Lap 19 to address a dislodged apex cone at Turn 6, while the final Safety Car on Lap 66 was again for debris, this time at Turn 6.

Ash Walsh triggered the second Safety Car of the day on Lap 35 when he made heavy contact with the tyre barrier at the high-speed Turn 6 after leaving the road while pressuring Craig Baird in the Mercedes.

The PIRTEK Enduro Cup is a tri-race series with the first being Sandown, the next, the blue-riband race, the Supercheap Auto 1000 at Bathurst and the final race the Armor All Gold Coast 600 on the streets of the Gold Coast.