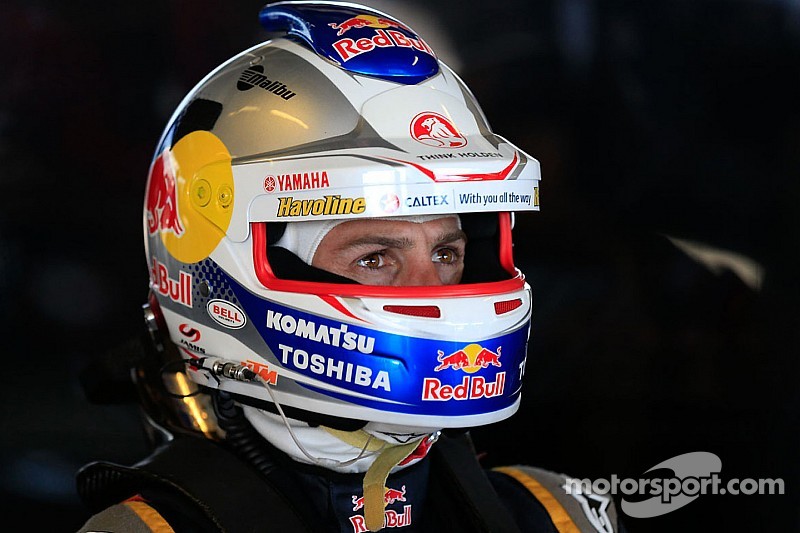 There has been a lot of confusion surrounding Jamie Whincup's failure to conserve enough fuel in the Bathurst 1000.

In the closing laps of the 2014 Bathurst 1000, Jamie Whincup held a three second advantage over Chaz Mostert. The team asked him to save them some fuel, but all they got was radio silence. Their pleas got louder and their tone more concerned, yet, they heard nothing from the five-time series champion.

He finally responded, but it was too late. He abruptly slowed and held Mostert off for as long as he could. Unfortunately for Jamie and all of the Holden fans, he came up a couple corners short. He's now posted a statement of sorts on his official website, explaining his side of the story.

"I thought I’d wait a few days to let the roller coaster of emotions from the weekend sink in and for my brain to get back to a normal operating range before I started hitting the keyboard to tell you my side of the story."

"All in all what an incredible race and week it was for motorsport.  I have never seen so much action and carnage in all my life and it was one of my most enjoyable weekends behind the wheel of a race car.  Once again I am really proud of the fact that for the 3rd year in a row car #1 took the battle down to the last lap of Australia's greatest motor race."

I had clear radio and knew I had the job of conserving fuel and sticking to a fuel number.

"I have never had a tougher lead up to Bathurst since joining the team back in 2006.  The weekend started with a bent tail shaft from Sandown which put us out of practice 1.  We then struggled for straight line speed with a slightly sick engine which the boys had to replace Thursday night.  The next couple of days saw two relatively heavily crashed cars - a going away present from Luffy on 888 and myself trying to find a couple of tenths that just weren't there. Trying to find that speed ultimately ended when I arrowed it into the fence in qualifying at the cutting and put our starting position for the great race 3rd last.  Combine all this with a badly balanced car which was genuinely 20th fastest in the final practice session and we were not in a good place at all heading into the final day."

Coming out of the gate swinging

"I am not sure what happened Saturday night, I’m suspecting the French Genie made an appearance to the garage and we came out Sunday morning absolutely flying.  Starting from virtually last, the mentality was to push hard and thats what we did.  After 15 laps we were in the top 5 which made up for our poor qualifying performance, but like everything, nothing comes for free and the side effect was we had another bent tail shaft and a well fatigued driver in a hot (but fast) car early on.  As I said on tele,  I was very doubtful that the tail shaft was going to last the day so I believe we got lucky (like many others) with that mid race red flag to repair the track as it allowed us to fix the tail shaft and race on to the end."

I was negotiating the most important 6 laps of my life on a tricky track full of sun glare and debris, and on worn tyres with no cool suit. I bent the rear view mirror away and had my head down doing what I do

"Just as we caught our breath the next drama unfolded with me making a slight error down at the chase and running wide which had massive consequences with a spin, blown tyre and a drive through penalty,  causing us to go 1 3/4 laps down. There was talk at this stage to circulate and save tyres for the next round but in my mind this wasn't even an option. We were there to race and race hard and that's exactly what we did."

"To not only get our lap back but to lead the race on the last lap makes me so proud of my team, I can hardly explain the pride.  Throughout the entire week it seemed that the more curve balls that came our way the more it lifted the crew and the harder they worked and fought for the prize - which to me means absolutely everything."

"There is a bit of confusion on what was going on after the final safety car which I’m happy to clear up for you. I had clear radio and knew I had the job of conserving fuel and sticking to a fuel number. At this point I was negotiating the most important 6 laps of my life on a tricky track full of sun glare and debris, and on worn tyres with no cool suit.  I bent the rear view mirror away and had my head down doing what I do, I was fully aware of my fuel number and while I didn't hit that number every lap I had a clear calculation on the average and was absolutley on target to achieve that number before the chequered flag."

"The thing was that the game changed when we hit the reserve fuel tank, we know it’s capacity is 2.5 laps but we had 3 to go.  It was clear then that we were in a bit of trouble and the numbers we were working to weren’t correct.  In hindsight.....................................actually looking back only gives you a sore neck, we rolled the dice, gave it everything we had and ended up 5th.  I’m sure the 12 other stories from our opposition are all a bit different, but this is our story on why we didn't win the great race."

"I can't thank you guys enough for the 1000's of calls, messages, emails and texts you have sent my way the last few days, with many of you suggesting my performance was the best you had ever seen.  Once again my performance is our performance and it's very humbling that you feel this way."

"As Jeff Fenech once said, I love youse all and lets do it all again next week at the GC600."

Mostert snatches Bathurst 1000 victory from Whincup on the final lap