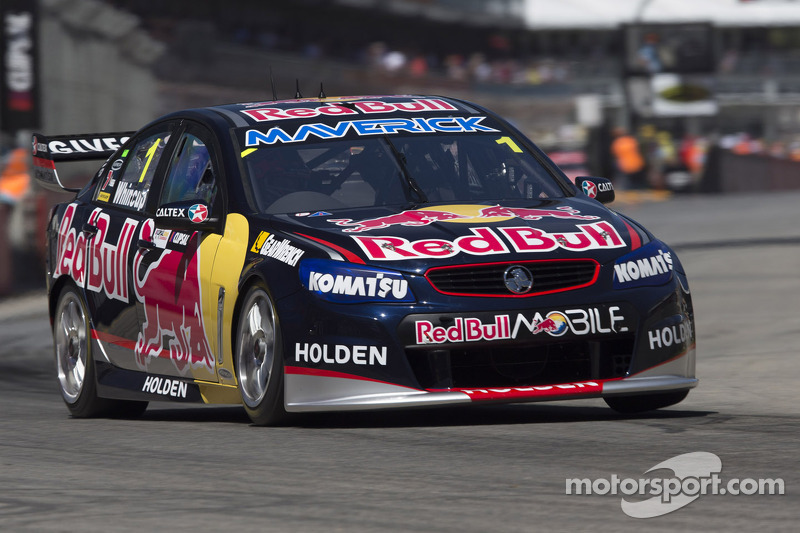 V8 Supercars Champion Jamie Whincup fired back at Bathurst winner Mark Winterbottom on and off the track on the first day of practice at the ARMOR ALL Gold Coast 600 today.

Whincup unleashed his trademark late run to claim fastest time in practice, and then hit back at claims from fellow contender Winterbottom who labelled the Champion's Red Bull Racing team as "arrogant."

The Red Bull Racing driver said his team was fired up by the comments.

"I only know of one clown who made a few comments," Whincup said. "I have disregarded them (the comments). Talk about bragging rights ... winning a race and making the most of it. I think that's what was going on there, getting a little bit carried away with a big win.

"But the Championship is a long year. I had nothing but praise for Car 5. Everyone involved with Car 5 at Bathurst did a great job and they deserved the win and I am looking forward to the battle right through to Sunday in Sydney."

Whincup led James Courtney (Holden Racing Team) and David Wall (Wilson Security) in a Holden trifecta at the top of the table on the tight and twisting streets of Surfers Paradise.

"It's crazy coming from Bathurst to this place. We come from a billiard table and nice open flowing place to what Garth (Tander) describes as a bull ring," Courtney said.

"We changed 450 different things today to try to get the car to handle nicely because there was a bit of under-steer and bit of over-steer. We got it right in the end."

It proved an excellent day for Courtney, who saved his praise for co-driver Greg Murphy for dailing in the car to near-perfection, following the Kiwi's costly mistake on Mount Panorama that ended HRT's strong run at Bathurst.

"We were happy with the car this morning straight up. We had a really good session plan and Murph did a sensational job tuning the car and getting it to how we would like it, and I just jumped in and played with the good tyres. It is probably all credit to Murph."

The veteran New Zealander said today and the weekend was a chance of personal redemption after his race-ending mistake at Bathurst.

"For my point of view there is some redemption for what I did up there and where it ended up. I still feel particularly shitty about that," Murphy said.

"For James' Championship and all that stuff, obviously it was pretty bad.So far the week has been quite smooth, much more so than at Bathurst. I would love to stand on a podium at the weekend. I am looking forward to the races and this place. I love racing here every year."

It proved a heartening day for Wall and his co-driver Chris Pither, with the pair on the pace all day until they bent a shock absorber on the infamous curbing. After the repair, Wall left his best run until the final lap on green tyres when he went third quickest, with nine of the top-10 cars in the 1min 10sec bracket.

The major disappointment was the BOC Racing team of Jason Bright when co-driver Andrew Jones cannoned into the wall at the chicane, and his team face a Herculean task to have the car fit for racing.

There is practice, qualifying and Top-10 Shootout tomorrow for the V8 Supercars ahead of the first 300km race, with a second 300km race on Sunday to wrap up the inaugural Pirtek Cup for the triple endurance races at Sandown, Bathurst and Gold Coast.