Practice day for the Australia V8 Supercars was extremely hot; especially for the drivers on and off the track Homebush circuit.

Although temperatures reached the mid 30’s Celsius s on the streets of Homebush, it was a hell of a lot hotter inside the V8 Supercars circulating around the concrete jungle in Sydney making it tougher on the drivers who were experiencing high 40’s.

That didn’t stop champion elect Jamie Whincup in the Vodafone Holden topping the time sheets after today’s practice sessions, although he did admit, “To be honest it was an artificial provisional pole. I struggled on the practice tyres and had to resort to putting on a race set in the last session”.

The heat also played havoc with lap times, down almost a second on last year. Apart from the heat the kerbs caused some drivers concern with sensors going off. 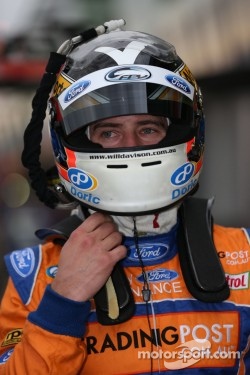 Will Davison in the Trading Post Ford saying, “I didn’t know what to do with the kerbs, there were some inconsistent calls and I was on the radio to the team”. Davidson has his eye on the $20,000 prize for the most poles in a season and said, “Behind Bathurst this is my most enjoyable track”

Garth Tander who grabbed third said his HRT Commodore said, “We struggled in session 3 and found another 2 seconds in session 4 which was pleasing for both me and the team”.

Like the other two before him he uttered his concerns for the health of all drivers during tomorrows 250 kilometre race. Although all drivers are required to wear the mandatory cool suits he believes that some may struggle particularly as the temperatures are expected to be worst over the weekend.