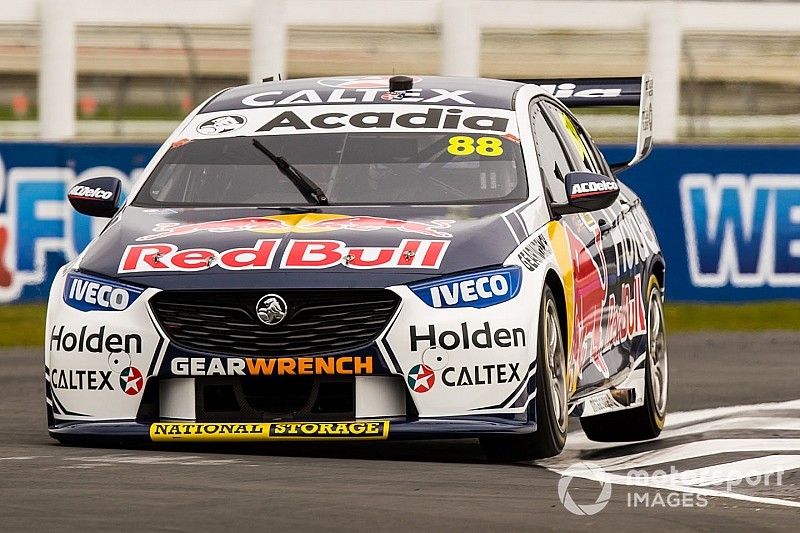 Jamie Whincup has been stripped of his second place from today's Supercars race at Pukekohe.

The seven-time series champ followed teammate Shane van Gisbergen home in what was a breakthrough one-two for Triple Eight, the squad's first since Sandown last year.

However there was always a cloud over the result, thanks to a second-lap collision with Nick Percat that left the Brad Jones Racing driver facing the wrong way.

Having initially deferred the incident to a post-race investigation, officials have now decided to slap Whincup with a 15-second penalty.

That means he drops to sixth, with Cam Waters elevated to second and David Reynolds third.

Even before being penalised, Whincup had confronted Percat about the incident to clear the air.

"I went down and spoke to his whole crew, and Nick as well," he said.

Percat, meanwhile, joked that the clash ruined his birthday.

"Jamie just said sorry," he said. "It was a pretty shit birthday present.

"I don't know, honestly, what I could have done from my position. I was just turning and it looks like he's had a lunge on [Scott] Pye and kind of misjudged how slow everyone was going.

"I was just on the racing line doing my thing."

"I would have assumed an instant drive-through penalty which, to be honest, would have been fair for any form of motorsport over the years," he said.

"I said to Jamie, if it wasn't me and you, and we were just sitting on the couch watching the TV and we saw that happen, what would we expect to happen? I said I think it would be a drive-through and he was like 'well, probably'.

"It's surprising. I'll go speak to [driving standards advisor Craig Baird] and see what he reckons, but I would have thought that in 100 years of motorsport, when you misjudge the car you're passing and hit the innocent bloke a bit further up, you'd be driving through the pits."