Whincup set for back to back titles

Team Vodafone pilot Jamie Whincup needs only 19 points to secure back to back championships at the Sydney Telstra 500 this weekend. The current champion can finish as far back as 28th in the first of two street races around the Olympic Park precinct ...

Team Vodafone pilot Jamie Whincup needs only 19 points to secure back to back championships at the Sydney Telstra 500 this weekend. The current champion can finish as far back as 28th in the first of two street races around the Olympic Park precinct at Homebush in Sydney's west. 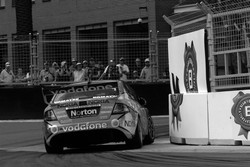 Whincup has lead the series all season since winning the last race in Adelaide, South Australia in March this year. If he should take the title, Whincup will be only the second person behind retired Holden Racing Team's Mark Skaife to do so. Skaife who was responsible for designing the track was given the privilege of being the first V8 Supercar to drive the track yesterday morning.

Whilst Whincup is set on a second title his arch rival and good friend Will Davison will be looking to grab the manufacturer's title for Holden now that he is powerless to stop the Ford driver.

This weekend sees the chequered flag dropping on the career of Cameron McConville who will call it a day so far as a full time drive with WOW Racing. McConville indicated half way through the season that he lacked the intensity to continue, although it is expected he will contest the endure races in 2010. With 10 years of experience in the top grade McConville will be an asset to any team.

Although it will be Craig Lowndes' last start in a Ford this weekend before returning to Holden next year, the most popular driver in the championship will be looking for a podium finish. Ford spent big dollars luring Lowndes from Holden with the aim to securing a number of titles. However that has not eventuated, but with team mate Whincup they won three Bathurst 1000 titles back to back, which hasn't been achieved since the late Peter Brock did it back in the early 80's.

Whincup and Lowndes didn't set the pace for yesterday's two practice sessions. Whincup was 12th in the first and 17th in the second whilst Lowndes was at the bottom of the time sheets for session one and 18th in the afternoon. 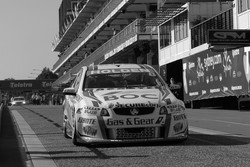 With this as the inaugural race at this circuit teams have no previous data to rely on and will be up to Saturday's qualifying to determine who will be at the front or the back of the grid, particularly with the new surface showing some signs of wear after just one day.

Being the first year of a guaranteed five, organizers for the event have gone all out to ensure the entertainment on the track is as impressive as that off the track with concerts over the weekend and a special guest appearance by Australian Sir Jack Brabham who won Formula 1 Championships in 1959, 60 and 69.