JAMIE Whincup has overcome an early race spin to win Race 4 of the 2012 V8 Supercars Championship at Symmons Plains in Tasmania.

The TeamVodafone pilot started from fifth on the grid but was able to work his way through the order to claim his 54th career race win.

An early race spin at the hairpin on lap nine dropped him back to fifth, but he picked his way back through. The win closes his margin to championship leader Will Davison to 18 points - the same number it was entering this weekend in Tasmania.

"We had a tough weekend all in all so to come away with that I'm a little bit shocked," said Whincup, who led home five Fords to claim his eighth race win at Symmons Plains and thus move past Peter Brock and Garth Tander with most race wins at the Tasmanian circuit in championship history.

We had a tough weekend all in all so to come away with that I'm a little bit shocked.

"It's crazy how this sport works. Nothing went right all weekend and we walk away with a third and a win. I don't want to dwell on the negatives but we'll improve on that.

"Lucky enough in the spin I nailed it and spun it around!"

"It was a bit tougher than yesterday's race," he said in a race where he clashed early with pole-sitter Craig Lowndes, the damage putting the TeamVodafone driver out of the race.

"It was a shame to have a touch with Lowndes. I knew he was behind me, I didn't really know where he was. I just felt the hit and that was that."

Stone Brothers Racing had a strong day with Tim Slade fourth and Lee Holdsworth sixth, separated by Mark Winterbottom, who lost time stalling on the exit of his second pit stop.

Michael Caruso charged through from 22nd on the grid to finish seventh from James Courtney, Jonathon Webb and Todd Kelly - who started 19th.

It was a tough day for Garth Tander - he had a clash early with David Reynolds that damaged the steering on the later's Falcon, and later the HRT driver suffered a puncture from a clash while in a dice with Webb and Rick Kelly. Tander eventually finished 22nd.

A total of 24 cars finished on the lead lap with the V8 Supercars Championship to resume in three weeks time for the ITM400 Hamilton in New Zealand. 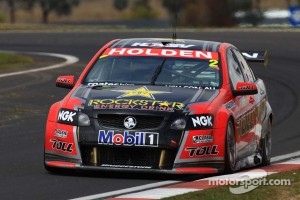 HOLDEN Racing Team driver Garth Tander has been found guilty of careless driving and lost 25 championship points as a result of a clash with David Reynolds yesterday at Symmons Plains.

The factory Commodore driver ran into Reynolds at turn 6 in yesterday’s Race 4 of the V8 Supercars Championship, damaging the steering of the young gun’s Bottle-O Falcon and forcing him to pit for repairs.

“I had a good start and despite struggling early on the hard tyres I soon got up to speed and then Garth Tander came from nowhere and just drilled me,” said Reynolds.

“He came from too far back and the impact broke my steering arm. That cost me quite a few laps when I came in for repairs. After that I just stayed out of everyone’s way.”

Race stewards found Tander guilty of careless driving and the loss of points moves him back one position in the championship to sixth, elevating Lee Holdsworth to fifth.

The 2007 V8 Supercar champion now sits sixth on 368 points after finishing a distant 22nd yesterday and is 199 points behind title leader Will Davison.

Reynolds was able to circulate and finish 26th, 12 laps down on winner Jamie Whincup.

He now sits 15th in the championship.