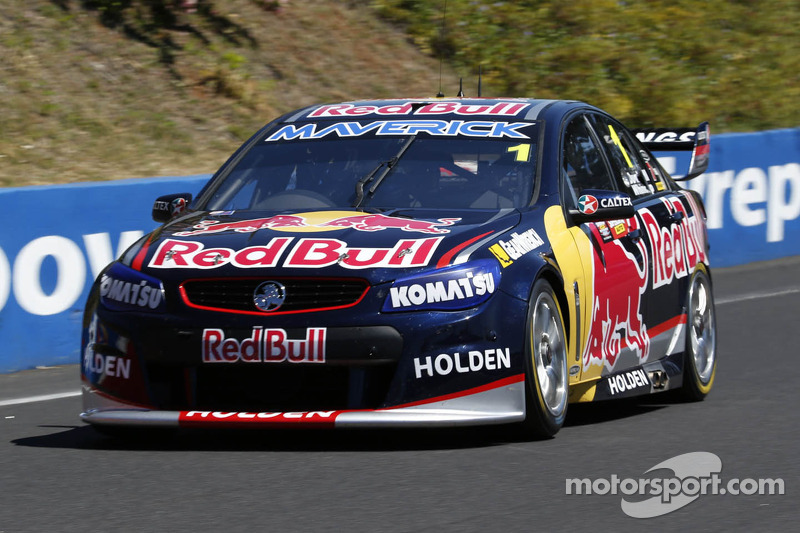 Whincup on Pole with 2min07 Lap at Mount Panorama - Whincup: "I'm just one of the boys"

A reserved Jamie Whincup declared he was little more than a contender than favourite for the Supercheap Auto Bathurst 1000.

Forgetting he has been the quickest of the field right through the weekend including his incredible ARMOR ALL Pole Position lap today, Whincup claims to be just one of the boys.

Whincup and team-mate Paul Dumbrell will start on the front row for tomorrow's classic, with the current Champion surprisingly declaring his team-mate will cut the first laps.

On the day Ford confirmed their ongoing commitment to Ford Performance Racing, Pepsi Max Crew's Mark Winterbottom will start alongside them on the front row with Team BOC's Jason Bright and flying Kiwi Shane van Gisbergen behind them.

The champion's 50th career pole has set up his co-driver to start in tomorrow's 161-lap race, according to Whincup, who was pleased but not over-excited with his performance today.

"The car was fantastic. I got a good lap out of it. I was pretty desperate. I didn't want to die not being on pole for the great race so I am pretty keen to have got that stat," Whincup said.

"It's an awesome stat but it doesn't mean anything for tomorrow. I wasn't flat out. My job is to show what the car's potential is and I was happy to do that."

Whincup says the ability of his teammate Dumbrell allows the team to run the co-driver from the start.

"We are very lucky that Paul's times are as quick as mine so we do not need to concentrate on Paul only doing the minimum amount of laps. He will probably do half the race if not more tomorrow."

Last year Whincup could not pip Winterbottom in the Shootout which he was able to rectify today.

"I was disappointed with last year. We were in a good position and I didn't maximize. I am not big on stats but to have a pole at the great race is a first for me which I am very happy about."

Winterbottom was also content with his performance and to be on the front row.

"The car felt so nice, the best it has all weekend. I am pumped, the front row of Bathurst, you can't be too disappointed with that," said Winterbottom.

"You get pretty excited in those shootouts. To own the mountain to yourself for one lap whether you are first or 10th it's an amazing experience and I had a lot of run."

Likewise Bright was pleased with his form and the strength of his car.

"I had my quickest sector over the top by miles. The car felt great, I was happy with the lap perhaps not with the first corner but the rest was really strong," said Bright.

"The cars have been difficult all weekend but just then it felt all hooked up."

Fourth fastest was Van Gisbergen who has been quick but under the radar all week in the Tekno VIP Petfoods Holden, ahead of Holden's James Courtney and Red Bull's Craig Lowndes.

While the rest of the grid was decided in yesterday's qualifying session, the final 10 each had a flying lap, with Fujitsu GRM's Alex Premat the first out on track.

Each filed out, GRM teammate McLaughlin second, who topped the Frenchman. David Reynolds followed, but was 0.1sec behind the young kiwi racer.

Will Davison and Lowndes improved the top time, but it was Gisbergen who sprung to the top with an amazing drive.

Courtney was next in the queue. A big moment at 'The Cutting' meant he was down 0. 2381sec at the end of the first sector, but he recovered for second, behind the TEKNO racer.

But it wasn't to be for van Gisbergen - each of the last three on track bettered the lap, Lowndes, Bright only just by 0.004sec, and then Winterbottom.

All cars are expected on the grid for tomorrow's 1000km race with the damaged cars of Chaz Mostert and Tim Slade back in working order.