Will Davison back in training after crash injury 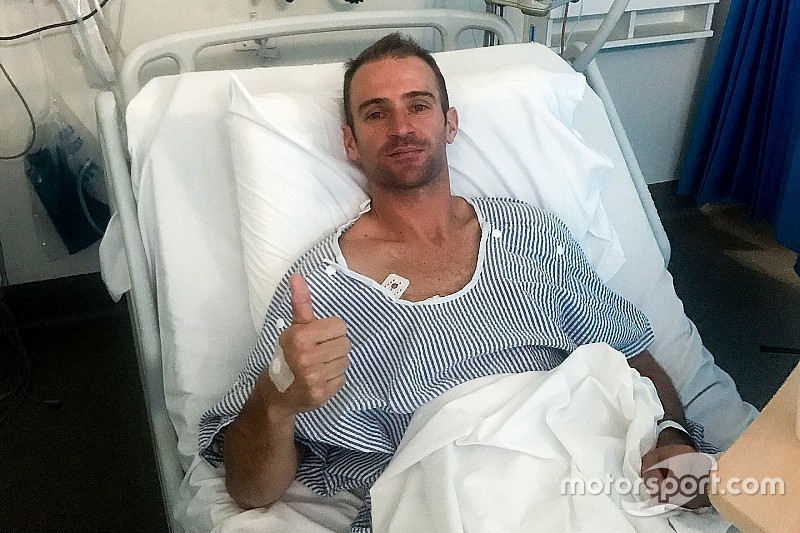 Supercars star Will Davison has returned to full fitness training as the fracture in his back he sustained in Tasmania last month continues to heal.

Davison suffered a small break to his right-sided transverse process – a boney projection off the vertebrae – when he collided with Rick Kelly during the 12-car pile-up at Symmons Plains two rounds ago.

He recovered sufficiently in time to race at Phillip Island, although did so with the help of pain killers and was unable to train in the build-up.

Davison is back to full training now, though, having kickstarted his regular fitness regime leading into the Barbagallo round.

That doesn’t mean he was pain-free during Sunday’s 200-kilometre race, though, Davison conceding that he was still a little tender, and that being locked in battle with Fabian Coulthard and Shane van Gisbergen helped.

“The back was a bit sore, I did feel it for the last 20 or 30 laps,” he said. “But it’s nothing bad, you always get a few aches and pains around [Barbagallo Raceway] anyway, there’s a lot of long-loaded stuff, and big brake pressure at the last corner.

“So I was feeling [the back] a bit, but fortunately I was in such a good battle that mentally it enabled me to stay in the zone and get through.

“I had a really good week of training coming into here, back to pretty much normal. So I’m looking forward to another good week before Winton. I’m back running, back cycling, back in the gym, and I’m building up a bit. I’ve got no dramas [with training] now.”

Davison enjoyed his best showing of the season so far on Sunday at Barbagallo, finishing fifth ahead of Coulthard and van Gisbergen.

The result came at a time when the front of the field is at its most competitive, thanks to the emergence of DJR Team Penske as a regular, consistent force. It means there is a effectively a ‘big six’ – the Penske Fords, the Red Bull-backed Triple Eight Holdens, and Prodrive Racing’s Chaz Mostert and Mark Winterbottom.

According to Davison, being in that mix makes fifth a great result for the single-car Tekno squad.

“A fifth with no attrition is a good fifth [this year],” he said.

“[The front-runners] have stepped it up and it’s hard for a lot of teams to keep up. It’s not impossible, but it’s hard. Particularly after the year we’ve had we’ve got to walk again, run again, get everyone’s chest back up, everyone’s been pretty down, pretty fatigued. It’s time like this where you’ve got to dig deep and regroup.

“It was an important weekend. We enjoy ourselves, we enjoy our racing. We can see signs of competitiveness again, and no dramas all weekend. We want more performance, but this was a good weekend.”

Davison added that he expects Tekno to still be able to compete with the likes of Penske, Triple Eight, and Prodrive, despite not having the manpower of the bigger teams.

“Yeah, we can [compete for wins],” he said. “It’s annoying, we want to be able to do it more often. But at the moment they’re pushing hard.

“There’ll be a time when hopefully we have the opportunity to get back to level playing field with equipment. And it’s not just equipment, it’s people. It’s such a fine-tuning game now, it’s not like magic widgets here and there. It’s an absolute fine-tuning game.

“I’ve got [engineer] Campbell [Little] here building shocks and springs and not looking at data, and that’s what small teams do – someone doing four jobs, you don’t have seven engineers sitting around and other people building things.

“It’s hard, but it’s not impossible. I think we all really worked well together this weekend. It’s certainly possible to be back fighting at the front.”