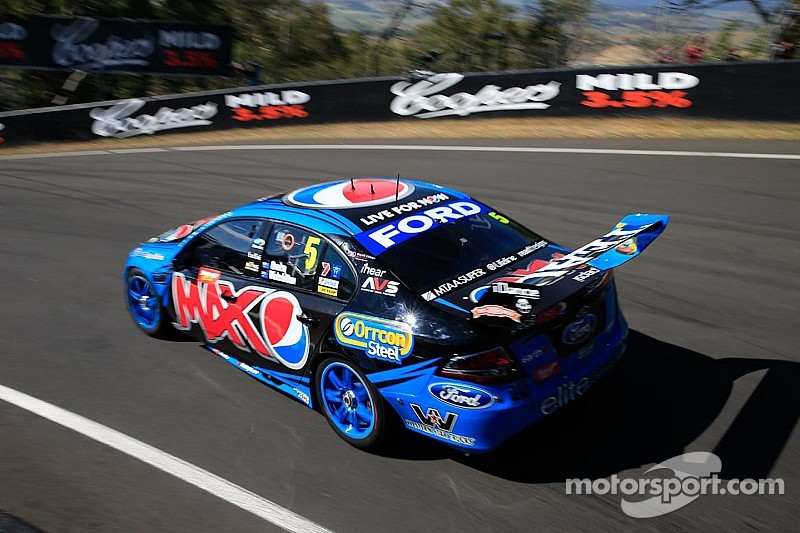 FPR proves once again that they’re the team to beat this weekend.

Just after fellow Ford Performance Racing (FPR) driver, David Reynolds, set the fastest lap ever on Mount Panorama during practice yesterday, the defending Bathurst champion, Mark Winterbottom, had something to say. With an epic time of 2:05.901, ‘Frosty’ is officially the fastest V8 driver ever around The Mountain and the only V8 driver to ever get into the 2:05s. His time sat unopposed and on the top of the leaderboard as he completed the practice event in P1. Still carrying the momentum of the previous co-driver practice session which saw his teammate, Steve Owens, set the fastest time, this is a much needed boast of confidence for the FPR team.

Volvo is a threat

Ready to show that the Volvo’s are here to play for keeps, the young Scott McLaughlin posted the second fastest time with a 2:06.149. It’s been 16 years since a Volvo won at Bathurst and with a time like that, McLaughlin is hoping to be the one to bring home a Volvo win.

Whincup back up on the charts

The current championship leader, Jamie Whincup, is showing that his Holden Commodore is back in racing form as he posted the third fastest time with a 2:06.174.

As yesterday’s lap record setter, David Reynolds keeps the Bottle-O Racing car in the top-five once again with a time of 2:06.215. Reynolds has been by far one of the most consistent drivers so far this week.

Rounding out the top-five was yet another FPR driver, Chaz Mostert. With three FPR cars in the top-five, Mostert secured his spot with a 2:06.384.

Shane van Gisbergen, who briefly posted the fastest time earlier on in the event, brought his VIP Petfoods Commodore into the pits saying that it was ‘un-drivable’. Still, the Kiwi managed to complete the final practice session of the day in ninth with a 2:06.724.

With the 2014 Bathurst 1000 being the 20-year anniversary at The Mountain for Craig Lowndes, many were expecting him to make some noise early on but that has yet to be the case. Finishing todays practice session in 11th, Lowndes and car #888 have struggled for pace so far in all of the practice sessions this week.

The Holden Racing Team (HRT) are also in the hunt for effective race pace. With many drivers running ‘simulator runs’ by completing a hot lap and then returning to the pits in order to simulate qualifying, The HRT boys of James Courtney and Garth Tander found themselves mid-pack in 12th and 15th respectively.

Things are getting mixed up and at this point, it’s anyone’s race. Still ‘Frosty’ has achieved a monumental feat by getting into the 2:05s but will it hold? We’ll find out soon as qualifying is due to begin shortly.