Mark Winterbottom says he won't get drawn into looking at Jamie Whincup and Shane van Gisbergen's set-up sheets on race weekends, despite the technical alliance between Triple Eight and Team 18. 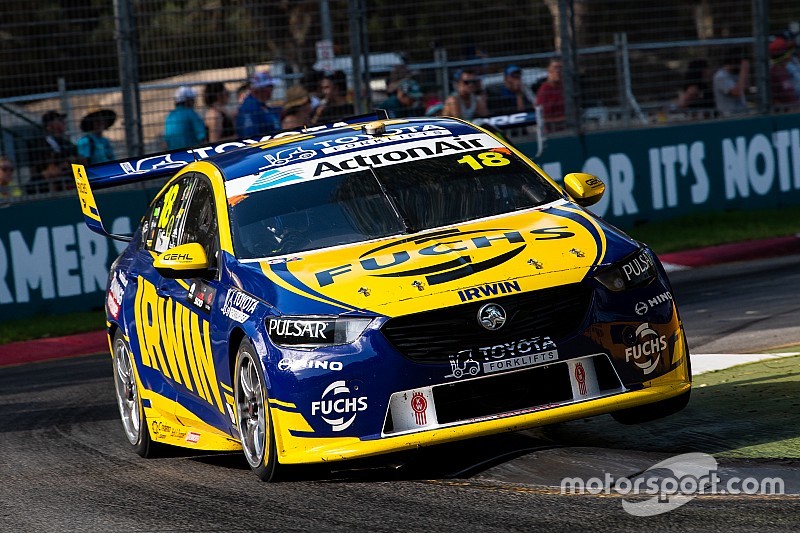 The long-time Tickford driver made a sensational off-season switch to a Triple Eight Holden run by the single-car Team 18 outfit, a deal that also includes a level of data sharing between the teams.

While he says he looked at plenty of data from T8 stars Whincup and van Gisbergen over the Adelaide 500 weekend – which saw him finish ninth on Saturday and sixth on Sunday – Winterbottom isn't planning on trying to get hold of their set-up sheets.

He was cagey on whether that would be allowed under the T8/T18 agreement anyway, but says it's not a path he wants to go down.

He reckons he'd rather let race engineer Phil Keed be the conduit between the two teams, as he looks to streamline the engineering process following a long stint in a four-car team.

"To be honest, I've left Phil to be the correspondent between us, but I've got so much trust in Phil and [Stuart McDonald] and those guys," he said.

"The good part about getting away from four cars is that I don't have to deal with that. I’ve got my car. I don't have a bloke sitting opposite me saying 'I've got oversteer', when I've got understeer. I don't have that now.

"That was one of the carrots to get me [to Team 18]. I don't get involved in all that set-up stuff. Phil and [Triple Eight] have got a good relationship, I don't know what he sees and what they see."

Looking at data, however, has been a crucial part of Winterbottom learning how to get the best out of T8 hardware – which involves breaking habits forged over his 13-year stint driving Tickford Fords.

"Thirteen years of what’s been forced into you to drive a car in certain way is flipped the other way for this car.

"I look at the data, I can see what [the Triple Eight drivers] are doing.

"I did the Tickford driving style in quali which cost me, and in the race [on Saturday] I drove the Triple Eight style and it’s massively different.

"People think you can switch, but when you are under the pump you revert back to your comfort and what you’ve done for 13 years. If you drive it that way then you have to set up the car that way, and then you start losing the connection.

"When you’re under pressure or you’re in qualifying and everything’s happening at 100 miles per hour you just revert back to what you know.

"And that's not working in this car.

"I didn’t leave it till 10:30 [on Saturday night], and the last two hours were driving coaching. ‘Do this’, ‘why are you doing this’ and a 100 questions, and I'm just getting coached again.

"In the race you can settle into a rhythm, but quali, it’s a lot of mental stuff. It's hard work."