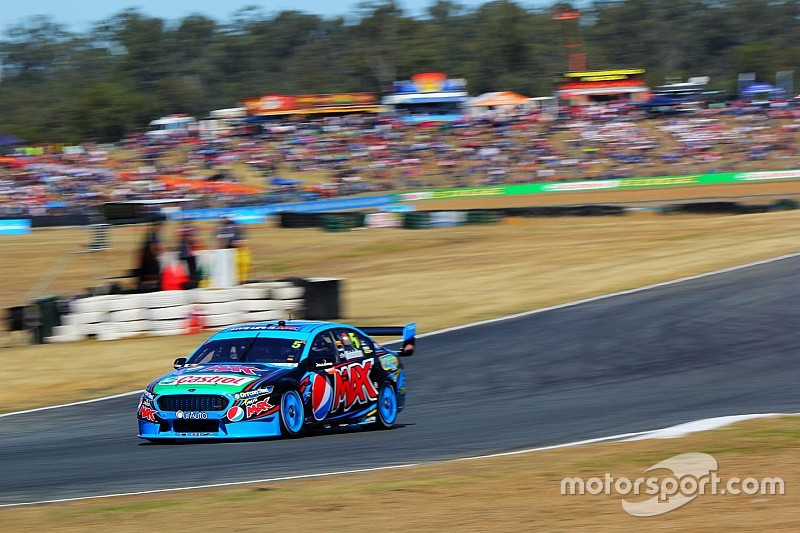 The Prodrive Racing Australia driver jumped team-mate and pole-sitter Chaz Mostert off the line, slotting straight into a lead he would easily hold for all 20 laps. In the end, winning margin back to Volvo’s Scott McLaughlin was 4.5s.

“Starts are everything. To get to Turn 1 first will let you dictate the race,” Winterbottom said.

“I got clear, and the car was pretty good. I’m struggling with it, I feel I can get a lot more out of it. But any win in this category is awesome.”

McLaughlin also did all of his racing right at the start, barging past Mostert on the run to Turn 1. Mostert did his best to come back at McLaughlin later in the lap, but the Volvo driver held firm. From there, he was clear to take his first podium finish of 2015.

And when Shane van Gisbergen and Mostert started scrapping over third, McLaughlin was free to slot into a comfy second position.

Meanwhile, van Gisbergen pushed Mostert wide to initially grab the final spot on the podium at the last corner of the first lap, and while Mostert tried his best to push back on the next lap, van Gisbergen had enough to keep the Prodrive Falcon behind.

The pair continued to run nose-to-tail for the remainder of the race, with Craig Lowndes joining the fight mid-way through the race.

What followed a thrilling battle for third spot, which came to a head at the start of the final lap when van Gisbergen and Mostert started making contact down the main straight. That allowed Lowndes to get a run on Mostert on the entry to Turn 1, and then set-up a move on van Gisbergen he could get done on the exit of Turn 3.

That left Lowndes with an unlikely podium, with van Gisbergen and Mostert forced to settle for fourth and fifth ahead of James Courtney and David Reynolds.

Will Davison was 10th, the best of the Erebus cars, ahead of title contender Fabian Coulthard who was just 11th.

Andre Heimgartner, who did so well to qualify third, ended up 15th after running wide on Lap 3.