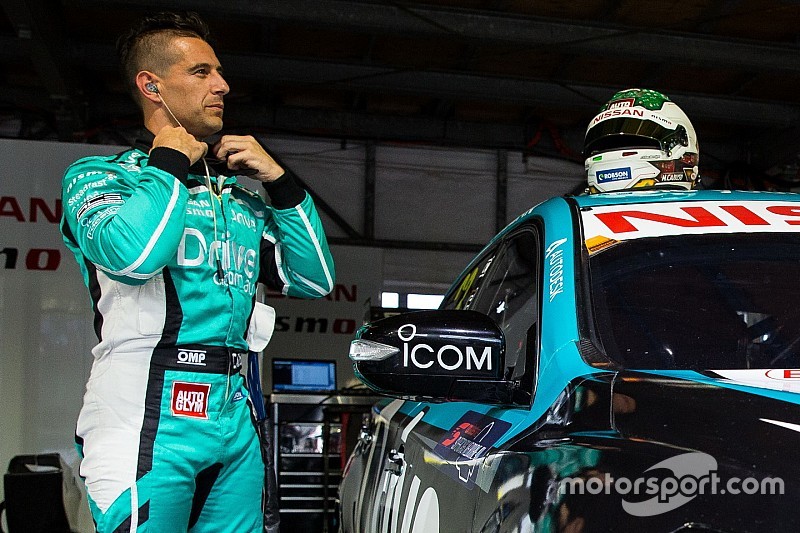 With conditions continually improving thanks to rain this morning, the 45-minute session effectively boiled down to a five-minute shootout of qualifying runs right at the end.

Caruso went into that critical phase as the pacesetter, having set a 1m20.044s on the half-hour mark. And while the Nissan driver was quickly shuffled down the order as times leapt into the 1m19s during the Happy Hour, Caruso was able to make enough of a gain of his own to beat teammate Rick Kelly to top spot by 0.016s with a 1m19.710s.

"Any time [Rick and I] are a hundredth off each other, it hurts a lot. One hundredth is nothing!" said Caruso.

"It's still pretty slippery out there, to be honest. The guys did a good job in that session to get the car to a point where I'm reasonably happy. But it'll be a lot faster tomorrow as the car gets bit better with more rubber. We'll just keep working on it.

"I'm angry at myself," added Kelly.

"The guys gave us a really good car. We ran a scene set of tyres that were older, and they didn't handle great. Then we put the greens on and I got to Turn 1 like a monkey, way too slow. It made me angry that I dumped that time. Clearly if I'm dumping time like and that and second, then the car is very good."

Behind the leading Nissans it was BJR Holden driver Nick Percat, followed by Fabian Coulthard and Shane van Gisbergen.

Andre Heimgartner capped off a good session for Nissan with sixth, while Chaz Mostert led the way for Tickford.

There were some big names nowhere near the top, such as Scott McLaughlin, who finished down in 15th after focussing on race runs. The points leader improved with a couple of minutes to go to jump from outside the Top 20 to inside the Top 10, only to be shuffled back down as others improved.

"I think we've got a really good understanding of the car," he said. "At the end we just put a bit of a better set, but it wasn't greens or anything. It was nice to get a balance heading into tomorrow."

Jamie Whincup, meanwhile, only made a tiny gain on his final run and ended up 16th.