Scott McLaughlin led an all-Mustang top three in Sunday practice at Winton, as a number of key Holden drivers missed out on an automatic Q2 spot. 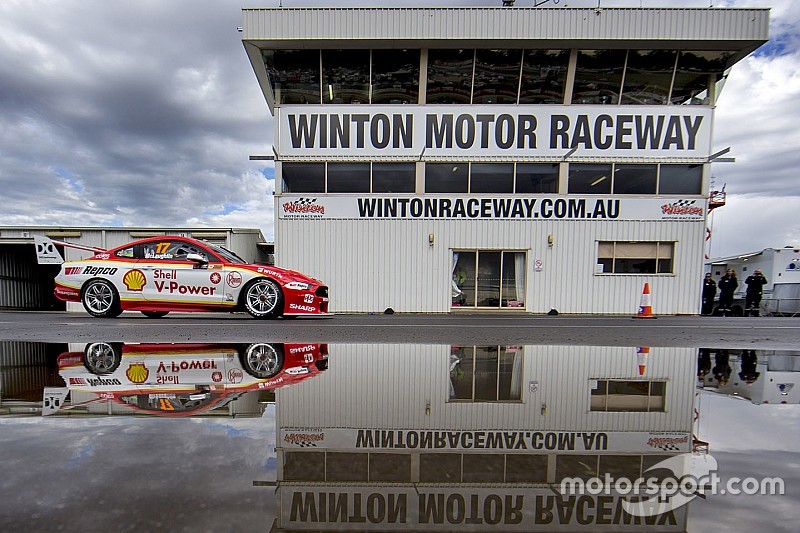 Crews were greeted by dry, cold conditions to kickstart Sunday's action, times dipping into the 1m19s almost from the word go.

It was Jamie Whincup that led the way initially thanks to a 1m19.734s, which left him roughly a tenth clear of yesterday's pacesetters Chaz Mostert and McLaughlin.

Just after the 10-minute mark Anton De Pasquale took over at the top with a 1m19.614s. However his stint in P1 was brief, McLaughlin moving himself well clear of the field with a 1m18.932s.

That time would have been good enough, but McLaughlin still came out at the end for a green tyre run, moving the benchmark down to a 1m18.920s.

“We made a bit of a chunk last night, we changed a fair bit because it just didn’t feel good over the kerbs,” he said.

“It’s definitely better there today, so we’ll see how we go.”

Mostert was next-best in the Tickford Mustang, finishing the session just under two-tenths behind McLaughlin, while Fabian Coulthard made 14 spots on his very last lap to slot into third and avoid a second consecutive Q1 berth.

Whincup and David Reynolds were the best Holdens in fourth and fifth, as Will Davison used his final run to bank a valuable spot inside the Top 10 with sixth.

Scott Pye led the way for Walkinshaw Andretti United in seventh, Cam Waters was a late improver to finish eighth, De Pasquale was ninth and Nick Percat the final driver to bank an automatic Q2 spot.

Lee Holdsworth was the only Mustang driver to miss out on the Top 10, but it wasn't by much, his gap to Percat just 0.006s.

Shane van Gisbergen and Mark Winterbottom will both be forced to go the long way in qualifying, ending the session just 15th and 18th respectively.

James Courtney, who finished fourth in yesterday's race, will need to likewise, finishing up down in 17th after an off at Turn 7 midway through the session.

“I broke the policy”: Penske drivers react to intra-team tangle