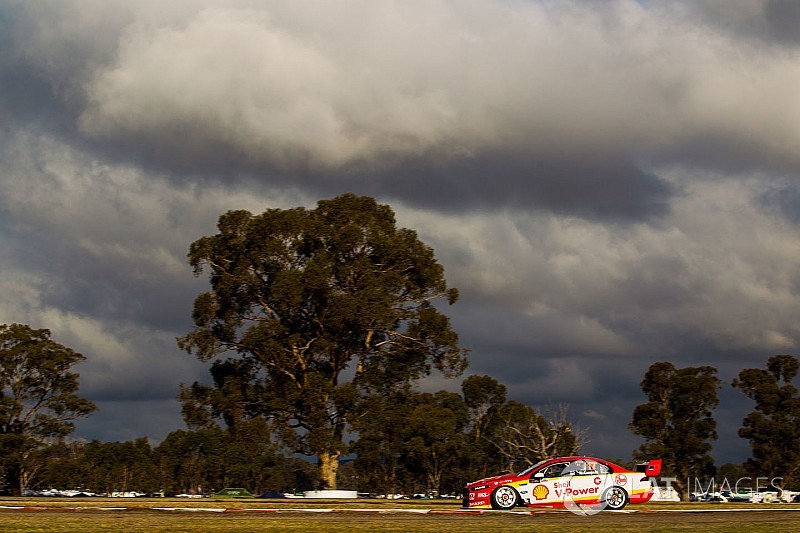 Scott Mclaughlin will start from the inside of an all-DJR Team Penske front row for Race 1 at Winton, after beating Fabian Coulthard to pole.

The high-grip nature of the Winton circuit meant there were no huge gains on the final run, both McLaughlin and Coulthard setting their best times around the midway point of the session.

And it was McLaughlin that got the best of that crucial early run, his 1m19.113s leaving him just over a tenth quicker than his teammate despite not finding any improvement on his final lap.

"It's great for everyone at Shell V-Power Racing, a front row lock-out," said McLaughlin. "It's nice to have Fabs up there, it's going to be an awesome race to Turn 1."

The leading Nissan showed their practice pace has been genuine, with Michael Caruso and Rick Kelly qualifying third and fourth respectively. For Caruso his 1m19.344s came on his first run, while Kelly made a small gain on his second run which didn't actually affect his position.

Scott Pye made gains on his final run to qualifying fifth, as did Tim Slade on his way to sixth. They both leap-frogged Mark Winterbottom, who dropped back to seventh.

Will Davison was shuffled back to eighth on the final runs, while Anton De Pasquale kept his strong from going by qualifying ninth – eight spots clear of teammate David Reynolds, who to this point had never been out-qualified by a driver on the other side of the Erebus garage.

It was another tough session for Triple Eight, Jamie Whincup the best of the Red Bull Holdens down in 11th. Shane van Gisbergen was just 14th quickest, while Craig Lowndes was left way back in 24th after struggling with front-end grip.

"We're only like seven or eight tenths off pole but we're almost at the back of the grid," said Lowndes. "It just shows how competitive this category is.

"We just couldn't get the front to switch on. We went up in the rear spring between the runs, looking to try kill the rear. But the rear of the car is really good. You just can't get on the throttle, which kills your straightline speed, kills your time down the straight. I'd rather have the other end be nervous than the front.

"We've been working at it all weekend. Unfortunately all three cars aren't as strong as they should be. We've got sit down collectively and work out why and how and lets make it change for the race."

Chaz Mostert, meanwhile, was 16th and worst of the Tickford drivers, one spot behind Cam Waters and four spots back from Richie Stanaway, who bagged his best starting position as a full-time Supercars driver.