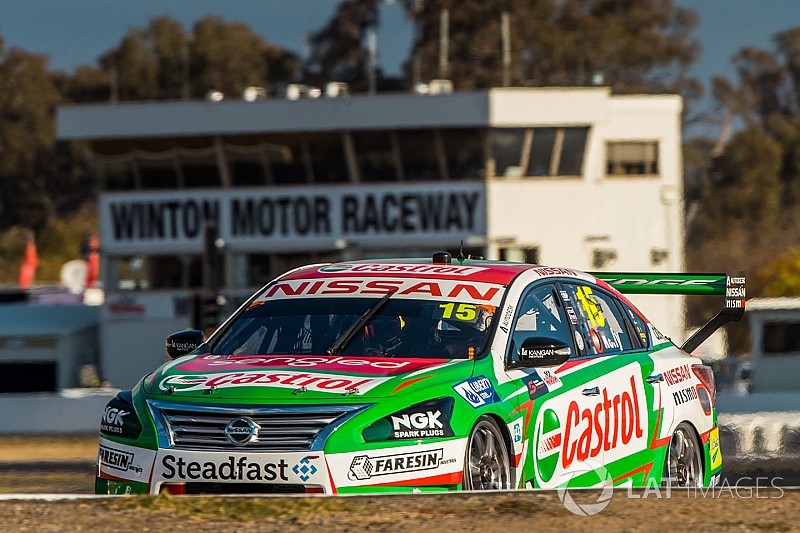 Rick Kelly responded to Nissan's impending exit from Supercars with a spectacular win thanks to some late drama for Scott McLaughlin at Winton.

The Nissan driver took advantage of a late restart to nab his first win in an Altima, pouncing on a restart mistake from McLaughlin and then holding off Scott Pye and Shane van Gisbergen on newer rubber in the closing stages.

For much of the race, it seemed that polesitter McLaughlin was cruising to a fifth-consecutive race win.

The Penske Ford driver was untroubled across the first 34 laps, following the standard strategy of a single, early stop on the low-deg circuit. McLaughlin's sole service came on Lap 7, the Kiwi arriving in the lane with the lead of the race and returning with the effective lead compared to the guys he was racing likes Kelly and Fabian Coulthard.

As the stops shook out McLaughlin filtered back into the actual lead again on Lap 27 when the last of the late stoppers came in, seemingly setting him up for a comfortable win.

However, a Lap 30 Safety Car, called when Tim Blanchard ended up beached at Turn 4, changed the game.

Suddenly McLaughlin's 6.5s lead was gone, with Kelly (on a similar strategy to McLaughlin) and Pye and Shane van Gisbergen (both on much fresher rubber after stopping late) within striking distance.

Uncharacteristically the pressure proved too much for the points leader, McLaughlin running wide at the exit of Turn 2 during the Lap 34 restart.

That hand-balled the lead to Kelly, while Pye, van Gisbergen, and Coulthard all charged through as well.

From there all Kelly had to do was hold off Pye and van Gisbergen with their better tyre quality across the final handful of laps. It seemed straightforward enough for a couple of laps as the other two squabbled over second place, but with two laps to go Pye started to pile on the pressure.

Kelly was up for it, thought, holding on for a remarkable win just days after Nissan announced its impending withdrawal from the sport.

"I'm trying to hold it all back. It was pretty quiet on the radio, I think everybody is pretty overwhelmed," said Kelly.

"I knew we were in a little bit of trouble at the Safety Car restart. Scotty was pretty straight, and I knew we had a lot of build-up on the tyres. I was hoping it wasn't just us, and sure enough it wasn't. He had a big wobble through one and two, and I got enough off my tyres to sneak up the inside of him.

"I'm pretty proud of that. The Castrol rig today was obviously incredible, the guys have put so much in to getting us to this point. We took advantage of the situation and got a win."

Pye and van Gisbergen finished second and third respectively, while Coulthard and McLaughlin were fourth and fifth, the latter left kicking himself for his mistake.

"A little error there," said McLaughlin. "The surface of the tyre was very cold; I went through the last corner and came onto the straight and thought 'Turn 1 is going to be interesting' – and it was.

"Unfortunately, the win went away from us. We'll rebuild and go tomorrow. We've got a fast car, that's the main thing."

Michael Caruso finished sixth, a slow stop costing him in the early stage of the race. The Nissan driver made a good start from the second row of the grid to slot into second place, ahead of Kelly and Coulthard, for the first stint.

However his Lap 6 stop simply took a little too long, which meant he went from second on the road to what was effectively fourth. He then lost more spots to Pye and van Gisbergen late in the race.

Jamie Whincup made a promising start to the race, jumping from 11th to ninth in the opening handful of laps. However a decision to pit earlier than anyone else, on Lap 5, ultimately didn't pay off. The reigning champion sunk like a stone in the second stint of the race, coming home back in 17th and dropping more points to the likes of McLaughlin and van Gisbergen.

David Reynolds' title hopes took an even bigger hit thanks to a Lap 1 exchange that started with a tap from Jack Le Brocq. The rookie made an ambitious lunge at Turn 4, grazing Reynolds before tipping Richie Stanaway into a spin. Reynolds then went off at The Sweeper with tyre and steering damage, retreating to the garage at the end of the first lap.

He did get going again, but ultimately finished 25th and more than six seconds off the lead. He's now dropped from third to fourth in the standings with a 249-point deficit to McLaughlin.

That means Lowndes, who went from 24th on the grid to 13th in the race, is now third in the standings, while van Gisbergen's third place means he took a small bite into McLaughlin's points lead, which is now 140.