He’s the world-famous lead singer of one of the most successful rock bands of all time, but that’s not enough for 64-year-old Brian Johnson. Celebrities’ buying expensive cars is nothing new, but few share the AC/DC frontman’s depth of enthusiasm and passion for motorsport – something that took him all the way to the Daytona 24 Hours grid back in January. At the recent Silverstone Classic event in the UK, we talked to the veteran rocker about his many and varied exploits at the wheel.

“Daytona was a bunch of old guys who’d done well in historic racing, and who wanted to climb automotive Everest,” he recalls in his distinctive north-east English accent. “We got together with two great professionals, ‘EF-R’ [Elliott Forbes-Robinson], who’s 73, and Jim Pace, who’s in his fifties. Our car was about six years old, but it was still competitive: we were about two seconds off the ultimate pace. The project was called ‘Highway to Help’, as we were racing to raise money for a children’s cancer fund.”

There were about 20 buttons on the wheel and I'd forgotten which one scrolled the display!

Johnson is not short of racing experience, having campaigned a Lola T70 sportscar in numerous historic events in the US, but this was his first time behind the wheel of a modern race car – a BMW-engine Riley MkXI Daytona Prototype. And he wasn’t long about appreciating the difference that 40 years of development can make. “Coming into turn one, down from about 205mph, you really have to slow right down to first gear,” he recalls. “I got back into the pits and my engineer showed me the telemetry, saying, ‘Brian, you're braking at 920psi.’ I thought that sounded pretty good, but then he said ‘no, I want 1200’! I couldn't believe it, ‘surely I'll spin,' I thought, but I didn’t. It was all about getting to trust the car.”

The amount of on-board technology in modern race cars also posed problems: ‘I was whacking round the banking at one stage and he comes over the radio asking me to ‘scroll down on the steering wheel and tell me what the tyre pressures are’. I was going 'Are you kidding me? What do you mean scroll down?’ There were about 20 buttons on the wheel and I'd forgotten which one scrolled the display! Those cars are just a different world in terms of the concentration level required. When I’d get out after about 55 minutes driving, I’d be dripping in sweat, whereas when EF-R or Jim Pace got out, there wasn't a drop of sweat on them, they were just calm and cool. That's the difference between a real pro and a gung-ho amateur like me. They're planets away from you, with natural ability that you wish you had. But it was still hellish fun!”

Although the race didn’t end in ideal circumstances for Johnson’s car (45 minutes were lost to repairs after Forbes-Robinson was hit by another car at 2am), he still enjoyed the event immensely, and they finished 11th in the Daytona Prototype class after 24 hours. “It felt so good to be there, and the top guys like Montoya and McNish were all wonderful, really helpful,” he said. “There was none of this 'just keep out of the way kid' – they were very welcoming. We had to be faster than all the GT cars to qualify, and there's some hellish drivers in those GTs, so we're very proud of what we achieved.”

At the Silverstone Classic, Johnson was participating in a special celebrity race alongside figures like Star Trek and X-Men actor Patrick Stewart, Jamiroquai lead singer Jay Kay and various British sports and television personalities. He was also in a very traditional British car for the event: a front-engine, rear-wheel-drive Morgan. “I’ve come from a big pro team with a car capable of 205mph with brakes that would stop you in a heartbeat and fantastic downforce and here I am sitting in this beast,” he laughs. “In free practice, I started off braking like you’re supposed to do, very hard and very late, but of course you can’t do that in these Morgans, because they have drum brakes at the back. But it’s a fabulous car: I feel like I’ve gone back to yesteryear when the driver really had to take care of his machine. I’m just loving it; it’s a whole new experience. I don’t know why I didn’t get one of these cars before now.”

It’s clear that, Daytona 24 excursions aside, Brian Johnson’s first love will always be historic racing. “I just love the noise,” he enthuses. “I found that the more races I was going to, F1 and Le Mans and so on, the cars seemed to be getting quieter and quieter. There’s just nothing like the sound at the start line when that green flag drops and about 30 McLaren M1Bs and Lola T70s go flying off – it’s almost like Zeus broke wind! It’s raw power, a huge roar that gives you goosebumps, and that’s why this event at Silverstone is fantastic – there’s nothing really like it in the States. I suppose the Laguna Seca meeting comes close, but this is just heaven for any petrolhead – I love it!” 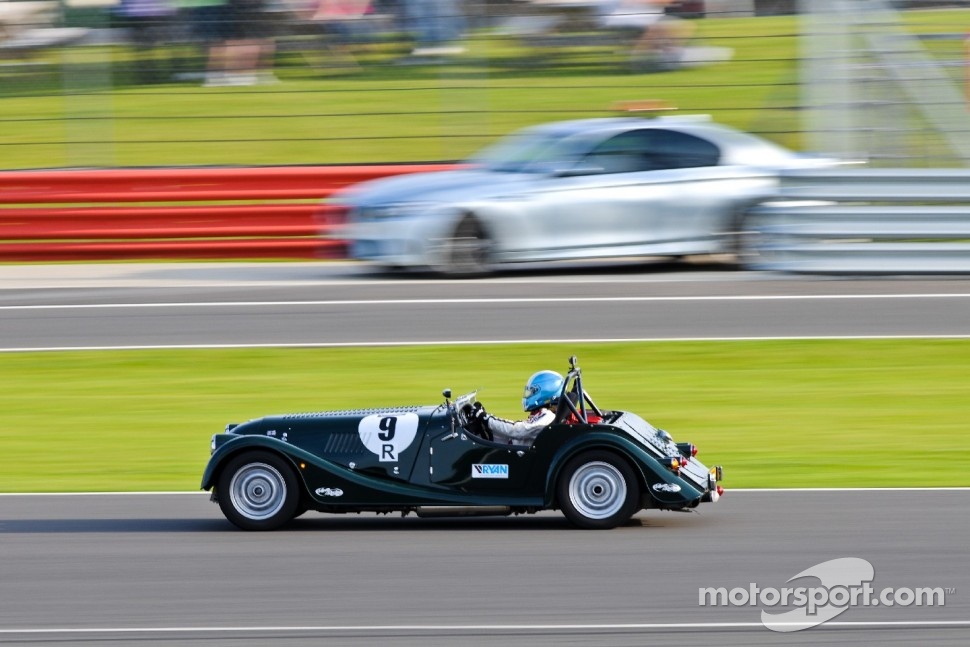