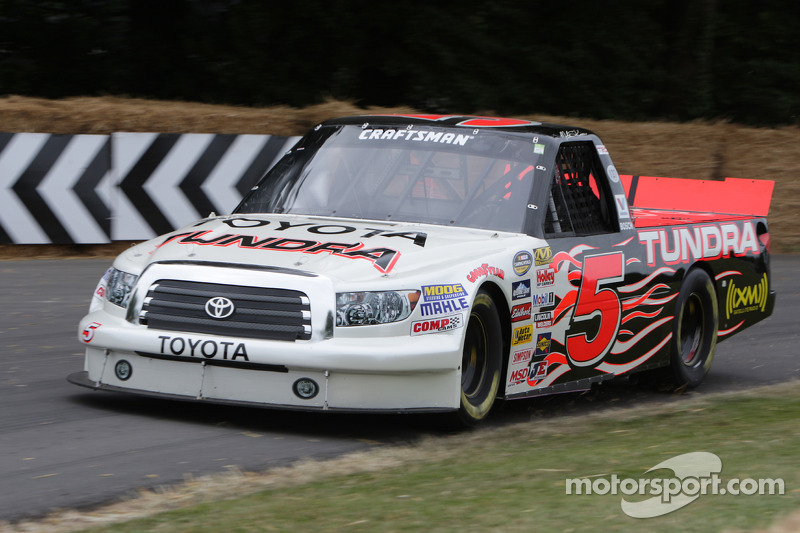 Former NASCAR Camping World Truck Series champion Mike Skinner was back to his winning ways last weekend setting a record in a NASCAR stock car and winning the Early Rally Cars division of competition at the iconic Goodwood Festival of Speed. Driving the 10th Toyota Tundra racecar ever built, Skinner paced the eight-car race against the clock to shatter the record formerly held by Rusty Wallace, and to complete the 1.16-mile hill climb in just 50.75-seconds.

"I love participating in the Goodwood Festival of Speed," Skinner said. "It's such an iconic event that brings the best drivers and cars from all forms of motorsports together. It's a great atmosphere to be a part of, and it meant a lot to me to be able to come out here with our 10-year-old truck and break the record time. We had so many friends and family members behind this effort, so it's really cool to represent all of them in a winning way."

Participating in his fourth Goodwood Festival of Speed event, Skinner raced his historic No. 5 Toyota Tundra with the support of several partners, family members and friends, including team owner Andrew Franzone. Chris Paulsen of C&R Racing and Jamie Skinner, Mike's oldest son, partnered as chief mechanics working on the car throughout the Festival of Speed weekend, and were joined by Garrett Jones, an up-and-coming stock car driver. Long-time sponsor WIX Filters joined the effort and was showcased on Skinner's firesuit, while Altamura Winery, Hope for the Warriors, Maui Jim, Justin Boots, Bad Boy Buggies, and Charlie 1 Horse Hat Company also supported the effort.

"I can't thank Andrew Franzone enough for backing this effort as our team owner," Skinner continued. "To have him and his brother and sister-in-law join us at this year's event was really cool. Then to have Chris Paulson of C&R Racing and my son Jamie working on the truck while we were in England, and my old crew chief Jeff Hensley helping me set up the truck back in North Carolina--it's just been really cool. From WIX Filters, Altamura Winery, Hope for the Warriors, Maui Jim, Justin Boots, Bad Boy Buggies, Charlie 1 Horse, and everyone else that came on board--it means a lot to me to have their support. This isn't a traditional racing event; you run historic paint schemes, so a lot of the partners that came on board to support me weren't recognized on our truck. They came on board specifically to support our effort, and that means a lot to me personally."

Hosted by Lord March at the Goodwood Estate in West Sussex, England, the 22nd annual event featured every kind of car imaginable from the 1800s through today and attracted some of the most accomplished drivers in motorsports.

"There's always such a fun atmosphere at the Goodwood Festival of Speed," commented Skinner. "Even though we went over there and were competing, we worked very closely with Danny Lawrence and the Richard Childress Racing guys. We all helped each other--even with the Michael Waltrip Racing and the Richard Petty Motorsports efforts. We had four Daytona 500 winners represented, and The King, Richard Petty, was there--it was just really cool. It's such a neat event, there's just one big thing after another for three days of competition; it's like the Kentucky Derby of auto enthusiasts."