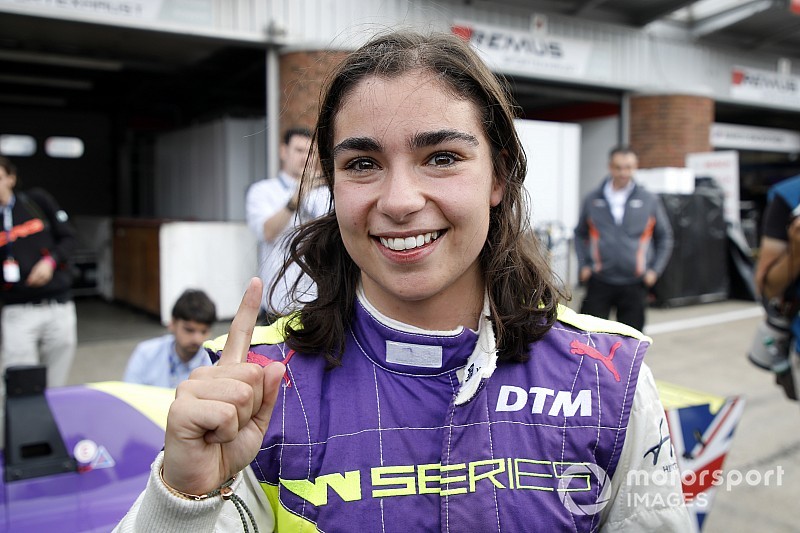 Chadwick led the early stages of the race from pole, ahead of Powell and Assen winner Emma Kimilainen, as Esmee Hawkey stalled from third on the grid.

Beitske Visser, who trailed Chadwick by 13 points ahead of the race, had started fifth, and though she managed to overtake Fabienne Wohlwend in the opening laps, she started to slip away from the leading trio of Chadwick, Powell and Kimilainen.

Powell put the pressure on Chadwick as the race approached half-distance, with the Williams Formula 1 development driver forced to defend over a series of laps.

That allowed Kimilainen to close the gap also, with both Powell and Kimilainen ultimately overtaking Chadwick at once through Paddock Hill Bend and up into Druids.

Powell and Kimilainen then began to extend a lead of almost nine seconds ahead of Chadwick, as Visser began to inch closer to her title rival in the fight for third.

Miki Koyama, who had already taken a penalty for being out of position on the grid, suffered a spin at the entry to Sheene Curve, prompting a safety car and closing up the pack.

That allowed Visser to overtake Chadwick for the final podium position - again at Sheene Curve - upon the restart, but fourth was still enough for Chadwick to claim the title and the $500,000 top prize along with it by 10 points.

Up front, Powell held on for her first win of the season by half a second from Kimilainen, elevating herself to third in the standings.

Wohlwend finished fifth just behind Chadwick and ahead of ex-GP3 racer Vicky Piria, who made up four places from 10th on the grid.

Jessica Hawkins ended the final race of the year in seventh place, with Marta Garcia in eighth after overtaking Sabre Cook at Graham Hill Bend on the restart.

Sarah Moore completed the top 10, while Hawkey ended up down in 16th after having to serve a jump-start penalty.

The top 12 drivers in the final standings are guaranteed places on the 2020 W Series grid, while the remainder will have to re-apply for a spot in the series next year.

Caitlin Wood and Gosia Rdest, who held 11th and 12th places heading into the race, were both jumped by Cook and Hawkins, while Hawkey also missed the cut along with Naomi Schiff, Vivien Keszthelyi, Shea Holbrook, Sarah Bovy and Megan Gilkes.

Chadwick reflects on "most stressful 30 minutes of my life"