Emma Kimilainen took her maiden W Series victory at Assen, having missed two rounds of the 2019 season due to injury. 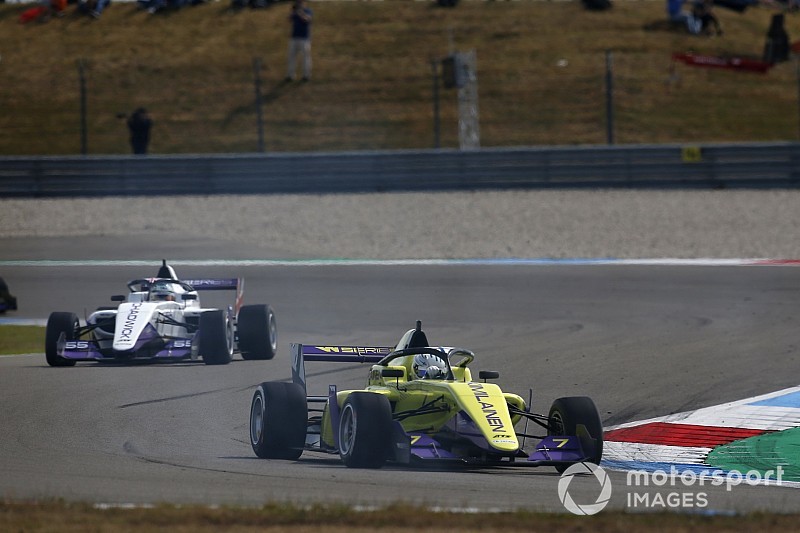 Kimilainen had set the pace on Friday and taken her first series pole in qualifying, lining up beside Alice Powell at the front of the grid.

Powell initially took the lead as the lights went out, but the race was almost immediately neutralised by a safety car as Tasmin Pepper spun across the track and was struck by Miki Koyama, who was unable to take avoiding action.

The race got underway again shortly after with Powell maintaining the lead, as both her and Kimilainen pulled away from the rest of the field by a margin of just over four seconds.

Kimilainen continued to apply pressure to Powell and eventually caught her out on the run into the first corner, with Powell running wide off the track and allowing Kimilainen past.

Kimilainen held onto the lead from then until the flag to take her first victory in the series, moving to sixth place in the championship.

Powell’s second-place finish means she moves back ahead of Fabienne Wohlwend in the championship for fourth place, with Wohlwend suffering damage to her front wing in a skirmish at the restart and finishing in 15th place.

Williams Formula 1 development driver Jamie Chadwick spent her entire race in third place and completed the podium. She was under pressure from title rival Beitske Visser in the latter half of the race, but Visser ran out of time to make a move on the championship leader.

The title fight therefore remains open as the series heads towards its final round at Brands Hatch on August 11, with 13 points splitting Chadwick and Visser.

Visser had overtaken Caitlin Wood in a move around the outside earlier in the race, with Wood coming home in fifth place to improve one position on her best qualifying performance so far.

Gosia Rdest and Jessica Hawkins were sixth and seventh, while Vicky Piria was eighth, up from 12th on the grid after an engine failure, and was ahead of Norisring winner Marta Garcia.

Sarah Moore, who had qualified fifth but was handed a five-place grid penalty for a Norisring clash with Shea Holbrook, ended the race where she started by completing the top 10.

W Series has added an additional non-championship Sunday race to its programme for this weekend in Assen, which will be run with an entirely reversed grid.