W Series CEO Catherine Bond Muir says a decision will need to be made by next week about if this season’s final two races go ahead amid its financial difficulties.

The all-female racing category has been left with cash flow dramas after the unexpected collapse of a deal with an unidentified American investor who had signed a contract that would have secured its long-term future.

After what Bond Muir referred to as a ‘slow train crash’ of realising promised money was not coming, she is now in talks with fresh interested parties to help W Series see out the campaign.

If no deal is forthcoming in the next few days, then there is a risk that W Series' final two events in Austin and Mexico next month will have to be called off, while the category then ponders its long term options.

Speaking at the Singapore Grand Prix, where W Series is a support category to Formula 1, Bond Muir said she was hopeful a deal could be put in place in time, but admitted there were no guarantees.

“We are speaking to a huge number of people, which is why I'm not sleeping very much, to get more money in,” she said. “I am reasonably confident that that will happen. I hope that the last few races will go ahead.”

With cars needing to be shipped to north America, Bond Muir admitted there is not much time for the series to make a call on what happens to the final events, saying it will "have to make a decision next week.” 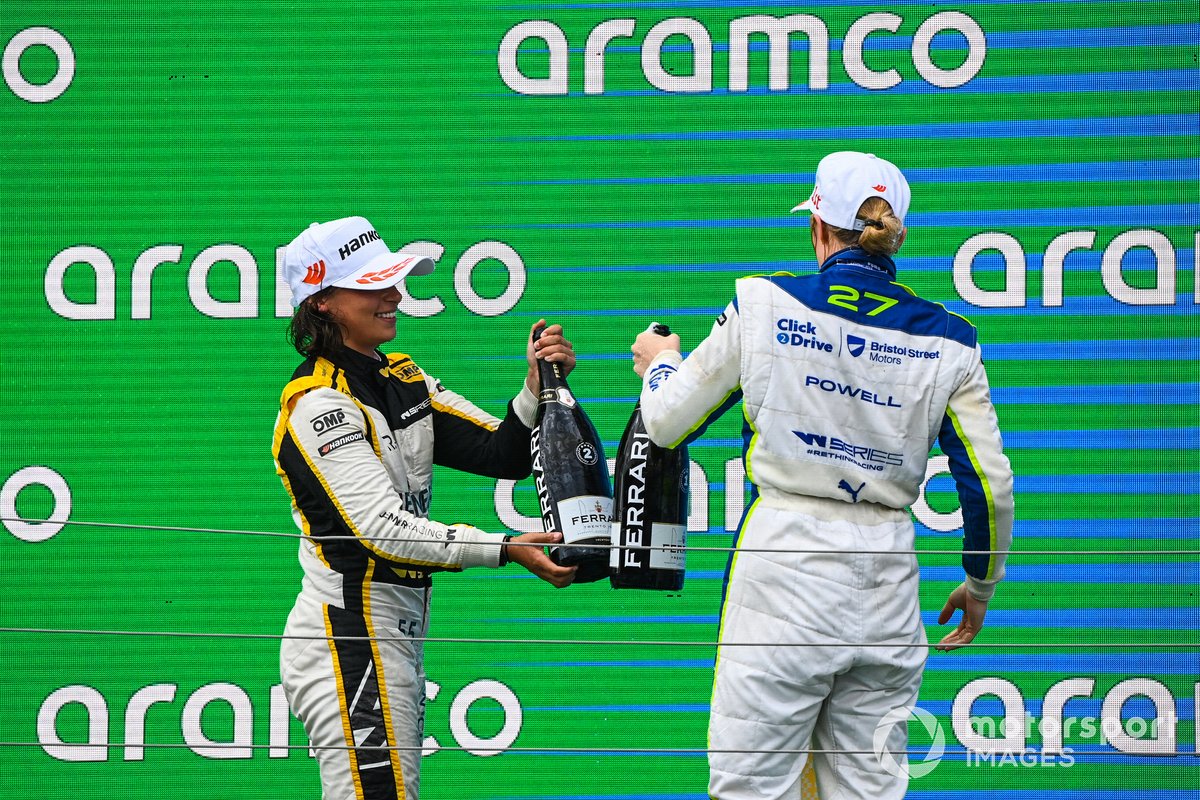 Jamie Chadwick (left) could seal her third consecutive title this weekend in Singapore.

Bond Muir said W Series’ financial problems had been triggered by a potential investor having reneged on a signed contract.

“Money that had been contracted to come in didn't come in,” she explained. “That's why it's become a bit stressful.”

Asked if the collapse of that deal had come out of the blue, she said: “These things tend to be like a bit of a slow train crash in that, there's a day in which you're supposed to receive money, and then it doesn't arrive.

“Then you sort of chase it for a bit, and then you go over and sit in front of them and say: where's the money?”

Bond Muir said that the issue with the previous investor would likely go legal, but the focus for now was on finding new backers to secure W Series’ future.

And while the negative headlines surrounding the series were not ideal, she said that the awareness of the situation W Series faced had prompted fresh interest from potential backers.

“That is the upside of it, that people have come out of the woodwork,” he said.

“Everyone obviously realised that we were looking for funding in the way that we were. We had advisors who were based in the States and we were predominantly looking in the US. So unquestionably whilst this isn’t a happy or great experience, it’s actually helped us quite a lot.”

Bond Muir vowed not to give up, though, having battled through so many previous hurdles to get W Series off the ground.

“I nearly gave up twice because I worked so hard to try to raise the money and I didn’t think it was going to happen,” she added.

“It was my husband who made me carry on. So, I’ve never given up before, and I’m not about to give up now. Look at what we’ve done, look at how much we’ve achieved.

She added: “I spoke to the drivers two days ago, it was a bit of a cry-in. They were 100% supportive, everyone was very upset. This means so much to everyone and I have had from them just unbelievable messages of support.”

Verstappen: F1 drivers should quit if not prepared for marathon battles