31 entries announced for the 2014 season 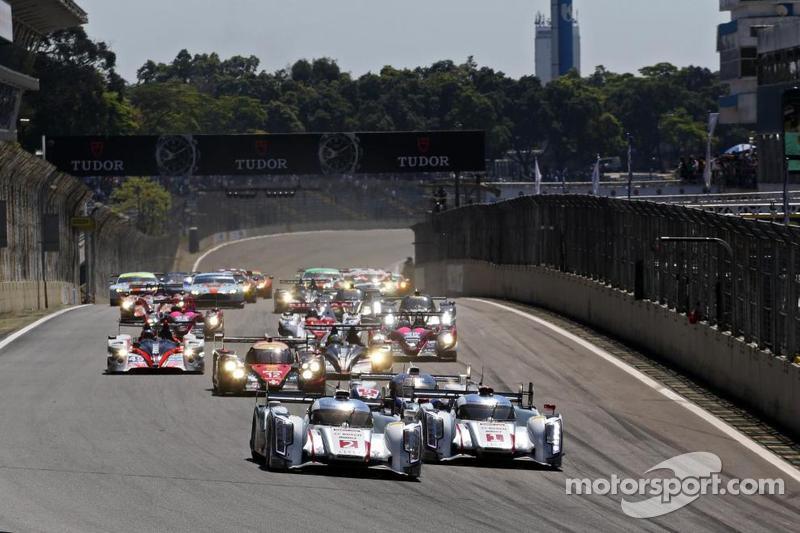 A solid number of entries for the WEC's third season.

LMP1 will become the largest segment with no fewer than nine cars, six for the LMP1-H and three for the LMP1-L classes. In the Hybrid division there are two cars for reigning world champions Audi, with the next evolution of the Audi R18 e-tron quattro, two for Toyota Racing with the new Toyota TS040 and two entries for Porsche as they prepare the new 919 for its first public appearance at the official test at Le Castellet at the end of March.

In the LMP1 Light category Rebellion Racing will enter two of its brand new Rebellion Toyota R-One, with Nicolas Prost and Matthias Beche announced as the lead drivers in each car, and Lotus has entered the brand new T129-AER with Christian Albers.

G-Drive Racing is one of three Russian entries in LMP2 and the multiple race winning team is switching to a Morgan-Nissan for 2014 with the driver line up headed by Roman Rusinov. The other two Russian entries are from SMP Racing, the team that made such an impact in ELMS by winning the GTC category at its first attempt last season. The team is entering two Oreca-Nissans with ELMS GTC Champion Kirill Ladygin and Sergey Zlobin as the lead drivers.

Millenium Racing is also running a pair of Oreca-Nissans with Fabien Giroix and Stefan Johansson, and the final full season LMP2 entry is by the Hong Kong-based KCMG team who will also run an Oreca-Nissan for Matthew Howson.

The LMGTE Pro class will also feature seven cars, with a new entry from ELMS LMGTE Champions RAM Racing, the British team stepping up to the World Championship with a single Ferrari 458 Italia for Matt Griffin in LMGTE Pro and a second F458 in the Am category.

Ferrari and AF Corse will defend their world manufacturer and team titles with a pair of Ferrari 458 Italias, with 2013 champion Gianmaria Bruni in the first car and Davide Rigon in the second. The Porsche works entry run by Team Manthey will feature Patrick Pilet and Marco Holzer in a pair of 911 RSR, while the two manufacturer-entered Aston Martin Vantage V8s, run by Aston Martin Racing, will see Darren Turner in the nr97 and Stefan Mücke in the nr99 car.

Eight entries have been received for the LMGTE Am category with four Ferraris, two Porsches and two Aston Martins. AF Corse will run a pair of Ferrari 458s for Luis Perez Companc, the LMP2 race winning Argentine switching to GTs, and for Australian Stephen Wyatt. 2013 LMGTE Team Champion 8Star Motorsports is back to defend its title with its F458, with team principal and lead driver Enzo Potolicchio looking to add the 2014 Drivers’ crown to his list of accomplishments. The fourth F458 will be for ELMS LMGTE Champion Johnny Mowlem and run by RAM Racing.

Proton Competition returns with Christian Ried as the lead driver for its Porsche 911 GT3 RSR while Belgian team, and long-time supporters of the 24 Hours of Le Mans and ELMS, Prospeed Competition, joins the FIA WEC with a 911 for Francois Perrodo.

Pierre Fillon, President of the ACO, said: “The ACO are very pleased to see a fantastic grid for the third season of the FIA World Endurance championship. These thirty-one cars represent the cream of endurance racing and they are the ambassadors for Le Mans on the world stage. 2014 will see a number of changes for the LMP1 class. We are very happy to welcome Porsche back to the top level of endurance and we are looking forward to seeing the battles on track between Porsche, Audi and Toyota. We also have the new technical rules for LMP1, which brings more real world relevance to our sport as these hybrid systems will be used by the manufacturers on their road cars in years to come. We are also pleased to see three cars entered in the new LMP1 Light category and we are also looking forward to seeing the new cars from Rebellion and Lotus in action.

“However the FIA WEC is more than just about LMP1 and we would like to wish all of the competitors in LMP2 and LMGTE the best of luck in 2014. See you all at Silverstone in April.”

Jean Todt, President of the FIA, said: “"When the FIA and the ACO came together four years ago to formulate the concept for the World Endurance Championship, our shared vision was to return sportscar racing to the prominence and popularity it enjoyed in the past. Then, its prestige was founded on its ability to provide thrilling, heroic racing on a truly international stage in an environment that delivered fascinating technological invention.

"It is therefore a source of great pride to me that as we approach the start of the FIA World Endurance Championship’s third season I can happily say that the competition is meeting all of those goals. With new teams, new drivers and the prospect of even closer competition this year I am sure that the 2014 World Endurance Championship will be a classic."

Gerard Neveu, CEO of the FIA WEC, said: “We are very happy with this grid for the third season of the FIA WEC. It has a very good balance between manufacturers and private teams and representatives from over 20 different nationalities. This, along with the eight races in eight countries on four different continents, underlines the FIA WEC’s status as a true world championship.

“The World Endurance Championship also offers stability as we will visit the same eight circuits as we did in 2013, which is important for establishing the brand in these markets. We also welcome our partners – Tudor, Michelin, DHL and Shell - and the manufacturers – Audi, Toyota, Porsche, Ferrari and Aston Martin - who are competing in this year’s championship.

“2014 is the next step on the road that we started along in 2012 and we are sure you will enjoy the next stage of the evolution of the FIA World Endurance Championship.”

Each team will be represented at ‘The WEC Prologue’ at Paul Ricard on the 28/29 March when the cars will all be together on track in Le Castellet for the first time.