8Star shows its potential in troubled 6 Hours of Silverstone

Enzo Potolicchio and 8Star Motorsports showed a great turn of speed, but were ultimately foiled by a driveshaft failure in the rain-shortened opening round of the 2014 WEC.

Venezuelan racer Potolicchio and his Italian teammates Paolo Ruberti and Gianluca Roda were remarkably equal in terms of performance and the pace they had over the course of an average stint was consistently solid throughout free practice.

8Star Motorsports went fourth fastest in GTE-Am during free practice one and then lapped the 5.89km Silverstone Grand Prix circuit in 2m00.311s to go second in the third and final practice session, although profound handling issues prevented the team from making an impression in qualifying on Saturday (19 April).

The impossibly mixed conditions made the going tough for even the most seasoned professionals, as the track surface constantly evolved, with a combination of wet, damp and dry patches ready to catch drivers unawares at the start. 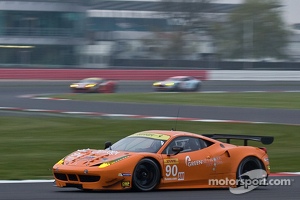 A dramatic and action-packed beginning to the 6 Hours of Silverstone hinted at what can be expected for the duration of the season and 8Star used its speed and consistency to continually trade places with its Porsche and Ferrari rivals as strategies played out.

The typically unpredictable Great British weather created dilemmas for teams and made tyre selection critical, and a preemptive call by 8Star to take on full wets, believing a heavy downpour was due, proved costly when the rain clouds actually dispersed.

The team switched back to slicks as the track dried out, although damp patches and the cool temperatures made generating tyre temperature a real struggle for Potolicchio and his teammates.

As the race reached the three-hour mark, changeable weather continued to be a the dominant factor, although several penalties for various infringements had also altered the running order somewhat.

The 8Star Motorsports Ferrari 458 Italia had already had its share of problems, spinning and then developing an electronics glitch on its pit lane speed-limiter that resulted in a trio of stop and go penalties for speeding on pit road.

However, an unfortunate driveshaft failure ultimately brought the 6 Hours of Silverstone to an end for 8Star. Crucially, the 118 laps it had completed were enough for the team to be awarded points for seventh place.

Potolicchio said: “The issue that caused us to retire from the FIA WEC 6 Hours of Silverstone was a non-typical failure on the Ferrari 458 Italia GT2. The fact is, the team has done an amazing job with the car and this is our first non-finish in nine races – we had a faultless run throughout 2013, so I can’t be too unhappy about it. This is racing and you have to take the rough with the smooth. Positions changed a lot during the race and we had some good battles with a Porsche and one of the AF Corse Ferraris, although we lost a lot of time when we made a wrong tyre call.

“Strategy was very difficult and it was impossible trying to predict the weather. We started out in the dry, with only drizzle falling and then it started raining and, because we thought it would only continue intensifying, we opted for full wets during the second pit stop, just as the rain eased off. We lost time there and also with a spin and three stop-go penalties for speeding in the pits as a result of having electrical problems with the car’s pit limiter.”

Potolicchio added: “I hoped to be vying for the GTE-Am victory, but not finishing this race isn’t a complete disaster, as we still get points for seventh and we need to focus on doing well in the 24 Hours of Le Mans, where you’re competing for double points. First of all is Spa-Francorchamps, which I really enjoy. I go really well there and won last year, the team has a good setup and I’m sure we’ll make the most of that.”

Conditions would deteriorate considerable thereafter, with intensifying rain and deepening puddles creating potentially dangerous conditions and spurring the Race Director to red-flag the 6 Hours of Silverstone 38 minutes before the scheduled finish time.

After the rain in Silverstone, a podium for Stefan Mücke

Impressive debut for 8Star Motorsports in the Indy Lights rounds at St. Petersburg