Advantage Audi in clash of the WEC titans 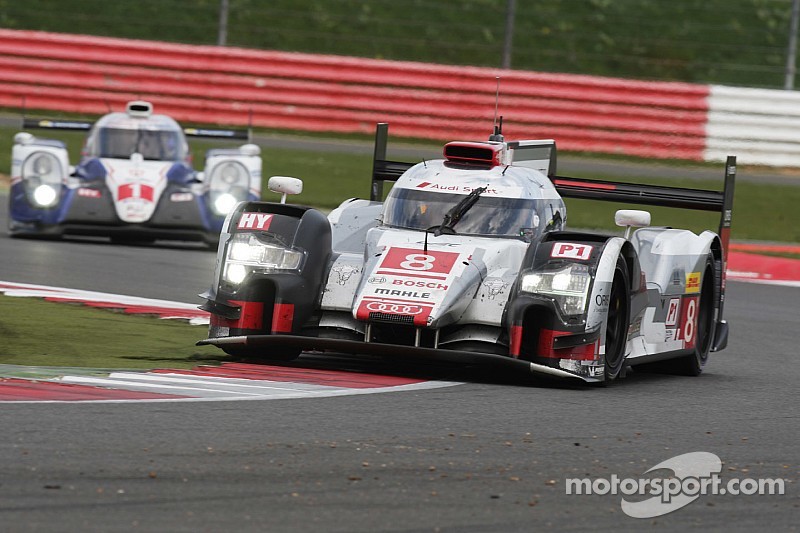 After a subdued 2014, Audi came out fighting with a victory at the first round of the new World Endurance season at Silverstone. Sam Smith examines the state of play among the series' big three manufacturers.

Audi should never be underestimated, having achieved far too much for that ever to be seriously contemplated.

It is however an indication of just how far Audi had fallen behind Toyota post-Le Mans last season, that there was an element of pleasant surprise that the Ingolstadt marque was back at the front and setting the pace at Silverstone last weekend.

Audi has the best all-round package - for now

Audi’s victory in last weekend’s opening round of the WEC was a just reward for some seriously hard work since last autumn, the evidence at Silverstone suggesting the team is once again the LMP1 class benchmark, in race conditions at least.

The result could even be argued to have flattered Porsche and Toyota somewhat, as a late stop-and-go penalty for exceeding track limits cost the winning #7 car 34 seconds.

The pace of the Audi in race conditions was impressive, each of the team’s drivers setting race lap times quicker than any of their rivals on Sunday. The best of 1m40.836s, set by Benoit Treluyer, was over a second faster than that of the next direct opponent, Porsche’s Mark Webber.

Audi has improved in many areas, but the most significant is in the vehicle dynamic and aerodynamic areas, as well as upgrading to the 4MJ energy retrieval class.

The R18’s new Linked Suspension System, sometimes also known as FRICS, is similar to that which Porsche was believed to be using last season. Audi’s system has been developed over the last year, and is believed to offer a significant enhancement on kerb use and balance optimisation.

"It is a very big tool you can play with and we are still understanding it better," said Andre Lotterer last weekend. "We already made a big step with it from yesterday (Friday) to today (Saturday) and we have reduced some of the 'bouncing' but this is one of the main things that we are focusing on but so far it is a good tool to have."

It was telling that, in the ferocious battle between Marcel Fassler and Neel Jani that raged for most of the fourth hour, the Audi was visibly quicker in the low and medium speed corners only to lose out along the straights due to the incredible 8MJ ‘thrust’ of the Porsche 919.

But, this advantage was not enough for Porsche, as the superior handling of the Audi through the first sector, the Luffield complex and the Maggotts/Becketts section was just too strong.

Remarkably, over the weekend the Audi was 22.5kph down on the Porsches at Silverstone (based on the speed trap figures halfway down the Hangar Straight) and Toyota was 18kph behind Porsche.

The sensational burst of speed for Porsche though looks very good for Le Mans, as long as they can manage the tyres. Audi are yet to publically unveil their low-drag version of the R18 e-tron quattro and we are likely not to see it in action until the test day on 31st May.

The retirement of the No.17 Porsche 919 Hybrid was a big blow for the team and instantly puts them on the back foot. As one of the masterminds of their direct rivals, Chris Reinke – Head of LMP at Audi Sport said before the Silverstone weekend: "A fundamental reason for the title escaping us last year were the points lost at Silverstone.

"We set the fastest laps there in qualifying and the race, but at the season opener, we had to digest the first and only non-finish ever in the WEC. Whoever wants to fight for the title must do everything to avoid such a situation."

Strategy also played a big part in the result last weekend. Although the #18 Porsche was able to complete the race distance with only seven pitstops, both Audis and the third-placed #1 Toyota pitted eight times.

Indeed, on their fourth, fifth and sixth stints the Porsche crew completed two laps more than their rivals and were still not within striking distance of the eventual winner. Porsche opted to save fuel in order to not do a splash in the final half-hour of the race, whereas Audi and Toyota elected to.

As ever, tyres were a key factor, and the simple explanation as to why Audi ruled the roost was that they could double stint their tires effectively, whereas Porsche chose not to even try. Was the extra energy retrieval ‘push’ just a little too much for the 919 Hybrid’s Michelins around Silverstone?

Of course, it is impossible to state what the initial leaders of the race, Webber, Brendon Hartley and Timo Bernhard in the polesitting #17 Porsche, would have been able to achieve had it not been for a broken gear bearing in the second hour.

The indications are that, despite opening up an gap and controlling the race’s early stages, they would have been powerless to resist the #7 Audi, which once clear of traffic had the capability to win the race with about a minute to spare.

Toyota meanwhile has far from stood still over the winter, but the initial prognosis for the reigning champion squad is that its significant advantage from late last year has dissipated.

At Silverstone, the Japanese brand at least made a fight of it by double-stinting the tyres on the #1 TS040; they would have been much further behind had the team not attempted to do so.

Toyota will of course re-group and come back stronger – the team was not entirely surprised that their cars were not the pacesetters at Silverstone, a track which has never suited the technical characteristics of its package. Last weekend was all about damage limitation for Toyota.

The conclusions from Silverstone are that the ACO and FIA deserve huge credit for creating a rulebook that can provide scope for three diverse hybrid systems to be utilised by three different manufacturers and yet still provide such remarkably close racing.

The truth is that each of the three manufacturers has key advantages, which will come to the fore at different circuits this season. The fantastic action we witnessed at Silverstone is only likely to get more intense and interesting as the season wears on.