Aston Martin Racing is looking to clinch victory and emerge as world champions in this, the marque’s centenary year.

Gaydon, 26 November 2013 - Aston Martin Racing goes into the final round of the 2013 FIA World Endurance Championship (WEC), the Six Hours of Bahrain, this weekend (30 November) leading the highly-competitive eight-race series and looking to clinch victory and emerge as world champions in this, the marque’s centenary year.

The team currently leads the LMGTE Manufacturers’ World Cup on 232.5 points but, with Ferrari in second place on 215 points and Porsche in third on 199.5 points, any of the three manufacturers can still win. 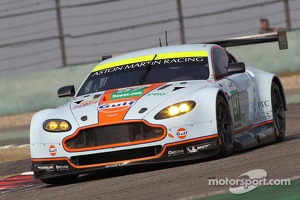 “If you were going to watch any of the WEC races this year, watch this one,” comments Turner. “I’ve never won a World Championship so I fully intend to win this one. Stefan and I have put everything we’ve got into this season. The car and the team have performed outstandingly all year and we’ve won more races than any other GTE team. Now we need to do it all again in Bahrain. It’s equally important for us to win the team and manufacturers titles, which will be just reward for the hard work the team has put in throughout 2013.”

Hoping to add some valuable points is the #99 car of Bruno Senna (BR), Pedro Lamy (PT) and Richie Stanaway (NZ). The team finished second in Shanghai a fortnight ago and aims for a repeat in Bahrain.

“We go to Bahrain with a clear goal,” explains Senna. “That is to score as many championship points as possible. Of course the ideal is first and second place for us and the #97, but we know that it’s going to be a tough race and everyone is going to be giving it everything.”

Also in contention for two titles is the #96 Vantage GTE, which is currently leading the FIA Endurance Trophy for LMGTE AM Teams as well as the World Endurance Cup for GTE AM Drivers with Jamie Campbell-Walter (GB) and Stuart Hall (GB).

“We’ve been leading the drivers’ championship since the Circuit of the Americas,” explains Campbell-Walter. “But, we had a bit of a tricky race in Shanghai, which let the 8 Star Ferrari catch up a little. We now go into the final round with just a five-point lead, which means we have a lot of work to do. What we are really looking forward to in Bahrain is that Roald [Goethe] is back racing with us. He’s been missed and, if we win in Bahrain, we want him there to celebrate with us.”

“I’d second that,” adds Hall. “The pressure is obviously on but the team working on our car has been fantastic all year and we are confident they will give us everything we need to succeed.”

Also in the GTE AM class, and looking to finish the season with a win, is the #95 Vantage GTE of Danish trio Christoffer Nygaard, Kristian Poulsen and Nicki Thiim.

“Everyone at Aston Martin Racing is looking forward to the final round of this year’s WEC campaign at Bahrain,” comments Team Principal John Gaw. “Of course, it would be nice to finish the job and achieve the objectives we set ourselves at the start of this very important year for Aston Martin.

“We know that to do this we will need to be at our best and we are ready to embrace the challenge.”

Should Aston Martin Racing succeed in its bid for the title, it will mark another major achievement in this, the brand’s centenary year. It’s 54 years since Aston Martin’s last motorsport world crown when the brand carried off the World Sportscar Championship in 1959 with drivers such as Sir Stirling Moss, Roy Salvadori and Carroll Shelby in action for the team.

Szafnauer has "no intention of leaving" Aston Martin F1 team